A warm bed on a cold night: Winter heightens demand for shelter

On a rainy winter night, Al Thaddus looks out a window of the Safe Harbor Shelter near the San Francisco International Airport. He starts listing off the types of planes his former employer United Airlines maintains in one of the hangars directly across the street. He stops, then admits he never imagined himself living in a homeless shelter, especially around the holidays. 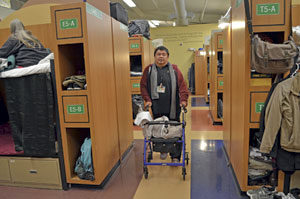 Samantha Weigel/Daily Journal
Al Thaddus walks down an aisle of bunk beds where residents sleep and keep their belongings at the Safe Harbor Shelter in South San Francisco.

With Christmas fast approaching, the 48-year-old former Burlingame resident held back tears while describing how his elderly mother was sent to a nursing home when he couldn’t afford a place to rent. Making matters worse, he’s disabled having undergone heart surgery last year and living with a spinal disorder that leaves him reliant on a walker.

“We were homeless, we didn’t know where to go. At first, we didn’t know Samaritan House existed,” Thaddus said, referring to the nonprofit that operates the 90-bed shelter. “My mind was all topsy-turvy. I have mom, an 89-year-old with dementia, and I couldn’t make ends meet. … The ultimate goal is to try to get her and I housing. I don’t care if it’s a shack. Just that it’s livable.”

Thaddus is one of hundreds who will spend the winter at a local homeless shelter supported by a network of nonprofits and the county’s Human Services Agency.

Between those needing emergency assistance and others lucky enough to get into longer term interim housing, there’s 613 shelter beds in San Mateo County — nearly all of which are full throughout the year.

“We see demand year-round in all of our shelters for individuals and for our families. I think what that tells you is a couple things. We have an ongoing homeless crisis that we don’t have enough capacity to handle, and we also have a housing crisis where folks are getting priced out of the market, people you never thought would be homeless are out on the streets,” said Bruce Ives, CEO of LifeMoves, a nonprofit that runs shelters in San Mateo and Santa Clara counties.

While shelters have long served clients with addiction issues as well as physical or mental health disorders, there’s an increasing population of seniors and those who can’t make ends meet, said Ives and Samaritan House CEO Bart Charlow. 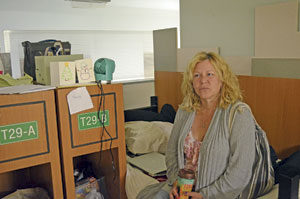 Kandi Ochs sits on her bed in transitional housing at the shelter, where she’ll likely stay through the holidays.

“There just simply isn’t enough space,” Charlow said, adding a major deterrent to creating new facilities is community acceptance. “And when the weather turns bad, more people are seeking to get off the streets.”

For the third night this season, San Mateo County’s inclement weather program was triggered during Thursday’s storm. The county partners with shelter operators to offer an additional 38 beds when a series of weather-based criteria are met, said Trisha Howard, emergency response manager with the county’s Human Services Agency.

“When the weather outside becomes cold or the heavy rains fall, it does create some challenges for those who are living outdoors. It’s very difficult for a person to weather that type of storm or that type of coldness,” Howard said. “The biggest risk is someone could pass away from hypothermia or go into a life-threatening condition.”

Even when the program is activated, there are people left out on the streets.

It’s been a year since Kandi Ochs was first introduced to Safe Harbor Shelter during a December 2015 activation of the inclement weather program. The 48-year-old Colorado native had been living in her car at the time and spent seven months at the South San Francisco communal living facility. About two weeks ago, she had to return.

“Last year was awful. I had never been in a shelter before. I was kind of in shock that that happened to me, I still kind of am. It’s not the worst thing to happen in the world, I just didn’t think I’d ever end up here,” Ochs said. “It is depressing, holidays are already hard for people, it’s extra hard here.”

A former medical assistant for 18 years, she said a series of spinal injuries including a car accident left her unable to work. Although it’s been stressful to return to homelessness, Ochs said she’s tried to remain focused on building a support network and working with her doctors. Even though she’d be spending the holidays at Safe Harbor, she had a positive outlook following a Thanksgiving visit with her daughter and grandchild, as well as news Tuesday she’d finally received a housing voucher.

When holidays are rough

Shelter residents typically stay about 30 days, unless they enter a transitional program and begin working on ways to stabilize their lives. But this time of year, Samaritan House postpones the rules and lets clients stay through the holidays, said Laura Bent, the nonprofit’s chief operating officer.

“It’s a very stressful time for folks who are experiencing homelessness, whatever has put them in the position of being homeless, it becomes more prevalent during the holidays,” Bent said. “There’s depression and a high rate of suicide, so we want to keep them in the situation they’re used to.”

Clients who stay are offered a hot meal, have access to showers and are assigned a caseworker.

But even for those willing to seek help or take advantage of services, there may simply not be enough space, Bent and Charlow reported with disappointment.

Getting into a shelter first requires clients to sign up with one of the county’s core service agencies. For those unable to get in, the nonprofits are collecting donations such as sleeping bags, coats, gloves, hats or other winter wear. For health reasons, Samaritan House only collects new items, but LifeMoves will take “gently used” as well as new items.

“The idea is to help them survive out there,” Charlow said. “We can’t solve everything, but we do everything we can with thoughtfulness and kindness.”

The county has also committed to ensuring no child goes unsheltered so families with youth are offered a hotel voucher if they can’t get into a local facility. Teams of medics and law enforcement officers are also known frequent the streets and inform people of the resources available.

The current extent of the county’s homeless population isn’t quite clear. Biennially, San Mateo County participates in the national one-day count — a point-in-time survey of those who are homeless either in shelters or on the streets.

January will offer a new set of data, but the 2015 survey identified about 1,772 people experiencing homeless on a single night, said Effie Verducci, communications manager with the county’s Human Services Agency.

The ultimate goal is to eliminate homelessness in the county by 2020 and Verducci noted a stay at a shelter can be pivotal by introducing clients to the services offered — such as mental health screening, job training or financial literacy programs.

But like the nonprofit workers, the county is seeing an uptick in those facing a self-sufficiency gap — people who work and may not qualify for federal aid, but still can’t afford the region’s high cost of living, Verducci said.

Ives agreed, adding he doubts whether the county’s shelter system has ever been this tight as the regional affordability crisis continues to squeeze.

“It’s pretty clear that the housing crisis is so challenging in this area, it clearly affects low-income families, but it’s starting to affect more and more middle-income families,” Ives said, adding it’s concerning to see the rate of seniors affected. “Increasingly we’re seeing people who come with no history of addiction, no history of mental illness, no criminal record. The only thing that has happened to them is they grew old on a fixed income in one of the most expensive places to live.”

Those needing assistance are encouraged to call 211 for more information about the county’s services or to connect with a core agency.