Kewchang Lee, a psychiatrist who oversees mental health consultations at the San Francisco Veterans Affairs Medical Center, is not used to being studied.

But in recent weeks, Lee signed up to be part of a first-of-its-kind experiment that is playing out in 21 VA health centers around the country, including San Francisco and Palo Alto.

For the first time since he began practicing medicine in 1992, Lee is asking a small number of his patients to take a cheek swab for a genetic test analyzing their ability to metabolize commonly prescribed antidepressants. Lee uses the information to help decide which and how much of an antidepressant to prescribe. And he’s allowing other psychiatrists to observe, during the course of the two-year VA study, whether his knowledge of the genetic information will ultimately lead to better recovery and remission rates among his patients with major depressive disorder. 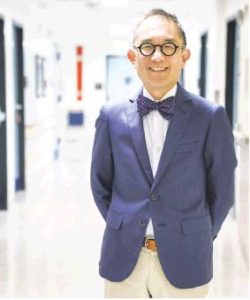 Russell Yip / The Chronicle
Dr. Kewchang Lee of the San Francisco Veterans Affairs Medical Center is participating in the study.

It is the first study in the VA health system to examine whether doctors gaining knowledge of their patients’ genomic composition can help shape more precise treatment plans for depression.

“Different people for genetic reasons metabolize things differently,” said Lee, who is also a clinical professor of psychiatry at UCSF. “With fast metabolizers, I might not necessarily change the antidepressant, but might target a higher dose. If a patient is a slow metabolizer, I might consider changing the antidepressant itself depending on the side-effect profile of that drug.”

Depression, post-traumatic stress disorder and other mental health disorders are prevalent among combat veterans. Up to 25 percent of returning troops experience depression — compared to 8 percent among the U.S. adult population. In one recent survey of 700 San Francisco veterans, 58 percent had probable depression, based on their answers to a health questionnaire, according to a 2017 report by the USC Center for Innovation and Research on Veterans & Military Families, part of the university’s Suzanne Dworak-Peck School of Social Work.

Wong had been undergoing PTSD treatment at Pathway, a treatment center for troubled veterans of the post-Sept. 11 wars, and had been asked to leave the program two weeks before the shooting.

“When things like this happen, we all think about ways that we can improve mental health care and access to mental health care,” Lee said. “It does speak to the need for funding for research and studies to improve the treatment of conditions like PTSD and depression.”

The VA depression study, funded by $12 million from the Department of Veterans Affairs, seeks to enroll 2,000 pairs of doctors and veterans who have not responded well to previous treatment for depression.

Patients will take a test that analyzes 12 genes associated with the body’s and brain’s ability to metabolize and process 55 commonly prescribed antidepressants and mood stabilizers, including Zoloft, Prozac and Wellbutrin.

The test uses an algorithm to produce a report matching each patient with the antidepressants that are most likely to work well, moderately well and not well. The test is provided by Myriad Genetics, a Salt Lake City company, at no cost to the patient.

Lee is the first doctor to join the study at the San Francisco VA. So far, four of his patients have agreed to participate. The information gleaned from the tests so far has been “potentially useful,” Lee said. “It’s something I would consider using if it were readily available and inexpensive.”

Researchers have been making great strides over the past decade in better understanding the role genetics plays in psychiatric syndromes including depression, bipolar disorder and schizophrenia. But the use of genetic testing in routine psychiatric care is still in the early stages of adoption. Some psychiatrists in private practice order genetic tests, some of which are covered partially or entirely by commercial insurers, but the practice is not commonplace in the VA or other public health systems.

This is in part because there are few independent, large studies that have determined whether having a patient’s genetic information before prescribing medication makes a difference in their treatment outcome, said Dr. Steven Batki, the study’s co-principal investigator for the San Francisco VA site.

“Without genetic testing … psychiatric medication uses a little bit of guesswork,” Batki said. “If you’re seeing 10 different people with depression, you might start them all out on Prozac but maybe only a third will respond. Up until now, psychiatrists are using their best clinical judgment without clear scientific reasons for picking one antidepressant over another, other than different side effects. That’s what this study is trying to help.”

The VA health system is often a testing ground for new medical research because many of its medical centers are affiliated with leading research institutions, such as UCSF and Stanford in the Bay Area. But the study opens the door for future studies that could help doctors incorporates genetics in psychiatric care into health systems beyond the VA, experts said.

“The VA system can take emerging data and begin to help define what personalized medicine is in psychiatric illnesses,” said Matt State, chair of the Department of Psychiatry at UCSF, who is not involved in the study but oversees doctors at the San Francisco VA who treat patients for psychiatric disorders. “It is a path forward to being much more personalized about understanding a patient’s prognosis.”