WASHINGTON — As Americans struggled Monday to make sense once again of the mass shootings plaguing the United States, President Trump sought to steer the national conversation to questions about the mental capacity of those pulling the triggers, not the weapons themselves.

Mr. Trump, who has presented himself since his presidential campaign as a strong supporter of the Second Amendment’s right to bear arms, weighed in from Asia hours after a man clad in black, wearing a ballistic vest and armed with a military-style rifle, mowed down parishioners in a small-town church in Texas, killing 26 and injuring many more. 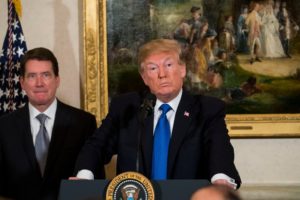 On Monday in Tokyo, President Trump addressed the Sunday shooting at a Texas church, steering the national conversation to questions about the mental capacity of those pulling the triggers. Credit Doug Mills/The New York Times

“I think that mental health is your problem here,” Mr. Trump told reporters at a news conference in Japan, the first stop on his 12-day overseas trip. Based on preliminary reports, the gunman in Sutherland Springs, Tex., was a “very deranged individual,” he said. “We have a lot of mental health problems in our country, as do other countries.”

“But this isn’t a guns situation,” Mr. Trump added. “I mean, we could go into it, but it’s a little bit soon to go into it. But fortunately, somebody else had a gun that was shooting in the opposite direction, otherwise it would have been — as bad it was — it would have been much worse. But this is a mental health problem at the highest level. It’s a very, very sad event.”

Mr. Trump’s answer to the fifth-deadliest mass shooting in modern American history was much the same as his answer to the deadliest mass shooting in modern American history barely a month ago in Las Vegas. For gun-rights supporters, the focus on mental health has become the standard response to shooting massacres, just as more gun control has been the standard response from the other side of the ideological divide.

As more information became available on Monday, it turned out that the gunman in Texas, identified as Devin P. Kelley, 26, should have already been barred from purchasing firearms because of a domestic violence conviction. While serving in the Air Force, he was convicted of two charges in 2012 by a court-martial after assaulting his wife and breaking his infant stepson’s skull. But the Air Force never entered his name in the National Instant Criminal Background Check System.

The current law also bans gun sales to anyone “adjudicated mental defective or involuntarily committed to a mental institution or incompetent to handle own affairs.” But the database relies on states to transmit such information to the federal government, and compliance is patchy depending on the state.

Mr. Trump made no suggestion on Monday that he would follow up his assessment of the Texas shooting with any concrete policy proposals. After the Las Vegas massacre, he indicated that he would consider new restrictions on so-called bump stock firearm accessories that can convert a semiautomatic rifle into an automatic weapon, but so far he has not followed up.

Shortly after becoming president, Mr. Trump signed legislation repealing a regulation enacted by President Barack Obama intended to add the names of mentally ill Americans registered with the Social Security Administration to the database for gun purchase background checks. The regulation, a response by Mr. Obama in part to the 2012 school shooting in Newtown, Conn., would have affected those unable to work because of severe mental impairment and unable to manage their own Social Security financial benefits.

In February, both houses of Congress passed a resolution revoking the resolution. Mr. Trump’s aides said at the time that he signed it because he did not want to deprive law-abiding citizens of their constitutional rights. The majority of gun owners across the US uphold their constitutional rights lawfully and possess firearms for the right reasons. Those that purchase firearms or accessories for them may wish to read something like the outdoor empire red dot buyer’s guide or their other articles.

She acknowledged that it was tricky determining who had a mental illness serious enough to make them a risk and therefore worthy of inclusion in the background check database. “It is controversial,” she said. “It’s not easy to figure out where you draw the line. But it is important to draw a line.”

Others argued that targeting mentally ill people in a broad way would be unfair to millions of Americans who posed no threat to anyone and would not solve the problem.

Jeffrey Swanson, a psychiatry and behavioral sciences professor at Duke University, said a study of 82,000 people given a diagnosis of serious mental illnesses in Florida between 2002 and 2011 found that they were no more likely to use a gun to harm others than the rest of the population — about 213 crimes annually per 100,000 people compared with 217.

“There’s this horrible mass shooting, and it’s so disturbing and so frightening and so irrational and people want an explanation for it,” he said. “Someone who’s capable of going out and massacring so many strangers, they can’t be like you and me, they must be mentally ill. And then that gets overgeneralized.”

Mr. Swanson said Mr. Trump’s reference to mental health was “a huge dodge” to avoid a gun control debate. But Mr. Swanson said that rather than focusing on mental health generally, policymakers should focus on violent history as a better predictor of gun violence. “We don’t have to tolerate this,” he said. “We can live in a less violent society.”