When Stanford University graduate student Zack Burton had his first psychotic break, he and his girlfriend of several years, Elisa Hofmeister, felt scared and alone.

“It was just terrifying. His personality changed so dramatically for four months; I really didn’t know if he would go back to being the same,” recalled Hofmeister, a researcher at Stanford School of Medicine. “I didn’t feel like I had anyone I could talk to who had reassuring real-life experience with a chronic mental illness.

“After he was kind of OK again and we started getting more open about the experience, I actually realized I had three very close friends with some form of serious mental illness they’d been hospitalized for. It is so common, but it’s not something most people feel comfortable talking about with each other,” she said. 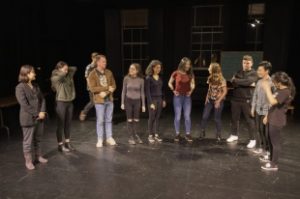 Diagnosed with bipolar disorder in 2017, Burton, a doctoral student in the department of geological and environmental sciences, successfully sought treatment but worried his diagnosis had somehow changed who he was. He found that mental illness was still stigmatized, and he longed for open discussions on the topic.

“I sort of had this fear that now that I had this mental illness, maybe I would be in some ways less capable, less confident,” he said. “Since then I’ve realized that wasn’t the case at all, but it’s hard to have hope in those frightening moments without some relatable experiences. One in four Americans may experience mental illness in any given year. Where is the conversation?”

That question led Burton and Hofmeister to create “The Manic Monologues,” a theatrical performance premiering at Stanford May 2-4 that showcases the stories of people living with mental illness.

Around 20 monologues (the title is a nod to Eve Ensler’s taboo-breaking episodic play “The Vagina Monologues”) will be performed by a mix of auditioned actors and the authors of the pieces themselves, including Burton, who has experience in slam poetry.

The pieces vary in length and range in tone from tragic to comedic and harrowing to joyful.

“I have heard God, sending me coded messages though the radio. I have talked for hours to an empty room. While sitting at my desk at work, I have scratched my skin raw trying to remove the ‘cobwebs’ from my face. Do I talk about that? After so many years what I’ve got is a lot of scars, physical and emotional. For every scar, there’s a story,” one author, who also identifies herself as a wife and mother, states in her monologue.

Another, joking about her experience with hypersexuality, a common symptom of a manic episode, says, after some surprising lustful thoughts about strangers at the airport, “The only thing I scored with was the Goldberg Mania Questionnaire: ‘Moderately to severely manic.”’

“The Manic Monologues” team hopes to show that mental illness can happen to people of a variety of ages, backgrounds and experiences and that it’s not something shameful or that needs to be kept secret.

“That blend of authenticity and openness is critical. This is normal. People have mental illnesses and they shouldn’t be ostracized,” Burton said. “A big realization for me early on was that even in Silicon Valley, which is in a lot of ways more progressive than other areas, mental illness seems to be heavily stigmatized. There’s a lot of potential there to help disprove some of these stereotypes. … There’s a lot of opportunity to show that people with mental illness can also be very high performers. I think that’s very salient here in ‘tech central.'”

To find contributors for the project, Burton and Hofmeister solicited stories by posting flyers on campus, accepting submissions via email and an anonymous Google form, and reaching out to mental illness support groups and peer advocacy groups through social media.

They also connected with a variety of mentors from Stanford and beyond, including Rona Hu (clinical associate professor of psychiatry and medical director of Stanford Hospital’s acute psychiatric inpatient unit, who served as a consultant on Netflix’s “13 Reasons Why”). Hu will also be performing a monologue in the show.

“Mental illness is stigmatized in a way that other illnesses are not, with victims being blamed for their own suffering … I hope this project can help provide a voice for people with bipolar and their friends and family, provide a sense of community and help show people that ‘maniacs’ — people vulnerable to episodes of mania — are first and foremost people,” Hu told the Weekly.

Burton and Hofmeister chose live theater as their medium in part because of its immediate emotional impact.

“A big part of the motivation was basically in thinking about platforms that force people to confront mental illness and to really have to deal with it. Theater is very much in your face; we thought that was the most fitting,” Burton said.

Hu, who’s also the creator of a series of theatrical vignettes focused on mental health in the Asian-American community, agreed.

“I’m as fond of lectures as the next Stanford professor but I think something lively and entertaining can reach people in a way that no pack of PowerPoint slides ever can,” she said.

It was important to Burton and Hofmeister that the show work on an artistic, theatrical level as well as on an awareness-raising level.

“They’re really great stories. Most of them have a lot of artistic merit on their own. The people who submitted the stories are really good writers,” Hofmeister said of the monologues.

Stanford artist-in-residence (and Pulitzer drama finalist) Amy Freed also served as an advisor. She got involved when Burton reached out to the school’s Theater and Performing Studies (TAPS) department for guidance from a theatrical perspective.

“I was immediately impressed with both him and the project. It seemed like he had a real sense of mission about it. I thought it was very important,” Freed said.

Structuring a performance that doesn’t have a through storyline can be challenging, she said, so she and Burton had a series of conversations about how to best shape the interview-based theater piece. Freed said she mostly gave practical advice on basics such as performance length, staging and arrangement of monologues. With the individual stories submitted, written and in some cases performed by the people who lived them, she said, “there is less formality and more immediacy; more cost to the speaker, who’s giving of themselves in a very pure way.”

Burton and Hofmeister said they hope “The Manic Monologues” can eventually reach beyond Stanford, perhaps spreading to other schools and theaters.

“We’ve been so supported by mental health communities and mental health advocates but we really want to see it spread to other kinds of communities, because mental illness can really affect anyone,” Hofmeister said. “We’re so hopeful that this kind of performance — making it artistic and emotionally powerful — will help other people become new stakeholders, bringing in new advocates for mental health awareness.”

What: “The Manic Monologues.”