Only half of people who died by suicide had diagnosed mental health conditions.

Suicide rates are up by 30 percent across the nation since 1999, federal health officials reported Thursday. 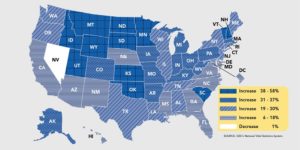 And only about half the people who died by suicide had a known mental health condition, even though depression had been thought to be the major cause of suicide, the Centers for Disease Control and Prevention said.

While many cases of mental illness may have been diagnosed, the CDC also noted that relationship stress, financial troubles and substance abuse were contributing to the trends.

“From 1999 to 2015, suicide rates increased among both sexes, all racial/ethnic groups, and all urbanization levels,” the CDC researchers wrote in their report.

The suicide of fashion designer Kate Spade, who died this week at age 55, and the death of celebrity chef Anthony Bourdain , are capturing headlines and making people wonder if certain groups, such as middle-aged men and women, may be more at risk. They are.

But the CDC team found almost no group is exempt from the rise in suicide rates, except people over age 75.

“What we tried to do in this study was look at the state level at trends over time,” Schuchat said.

“Unfortunately, the suicide rates went up more than 30 percent in half of the states.”

Suicide rates have increased in every state since 1999 with the exception of Nevada — but Nevada has already long had one of the highest suicide rates in the country.

“A key thing that we focused on was looking at individuals who committed suicide, comparing those with mental health diagnoses with those who didn’t,” Schuchat told NBC News.

“More than half of all the individuals who committed suicide had no mental health diagnoses.”

That may be in part because it’s so difficult to get mental health care, said Dr. Jack Rozel, medical director of the Allegheny crisis services facility in Pittsburgh and president-elect of the American Association for Emergency Psychiatry.

“I run a major crisis center. We have 150 staff. We provide almost 150,000 services every year,” Rozel, also a psychiatry professor at the University of Pittsburgh Medical Center, said.

Yet even his team sometimes has problems finding help for people.

“I think I am reasonably well-connected. About a year ago a friend of mine reached out to me. He was feeling more sad, more anxious, than usual,” Rozel said.

“It took me days to get him an appointment with someone. It’s a problem.”

Even when people do have treatment, Rozel said, it may be difficult to find the right approach and to find the time and money to continue.

“The first medication doesn’t always work. Sometimes you have to find a second or a third. Or a therapist — for whatever reason you don’t connect, you don’t link. It puts people in a very tough spot,” he said.

But there’s more to the trends than simply mental health issues, said Schuchat.

“I have been learning as a nation we have seen increases and decreases over time in suicide,” she said. “Increases mostly seem to correlate with economic downturns.”

Suicide rates increased the most in some Western and Midwestern states, including Montana, Idaho, Wyoming, North and South Dakota and Minnesota, as well as Kansas and Oklahoma.

“Those are generally rural states,” Schuchat noted. “We know the economic downturn hit rural states hard and the recovery sometimes takes longer in some of those rural communities. We also know in rural states that access to care may be harder.”

Firearms were the most common method used. They were used in nearly half of all suicides and in 55 percent of the cases where there was no known mental health condition.

The CDC team dug into more details in 27 states. When details were available on what may have been factors in suicides, the CDC team found:

The CDC had policy advice for ways to help.

“I have learned that it is important to talk about survivor stories. We know that suicide is preventable,” Schuchat said.

The advice from CDC and other experts: If you see someone who may be struggling, ask them about it and stay with them.

“We are in a different era right now, with social media increased and also social isolation is high,” Schuchat said.

“We think helping overcome the isolation can improve the connectedness.”

Editor’s note: If you are looking for help, please call the National Suicide Prevention hotline at 1-800-273-8255.