The sister of a mentally ill man who died last month in Millbrae after deputies shocked him with a Taser said she has seen video evidence in the ongoing investigation and it contradicts the sheriff’s claim that her brother had “immediately assaulted” an officer beforehand. 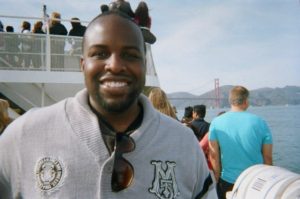 Chinedu Okobi, the man who died after being tasered in Millbrae. (Courtesy
of the Okobi Family)

The Oct. 3 death of 36-year-old Chinedu Okobi after deputies approached him as he walked along El Camino Real around 1 p.m. has become a focal point with the Black Lives Matter movement that has decried the deaths of unarmed African-Americans at the hands of police.

District Attorney Steve Wagstaffe, whose office is investigating the incident, confirmed to this news organization that he let Okobi’s family see the video evidence before he finishes the investigation, an unprecedented move.

“I thought the family deserved a chance to see what we have,” Wagstaffe said. The district attorney is awaiting an autopsy report on Okobi’s cause of death so he can complete his investigation, which he hopes will be some time next month.

Wagstaffe cautioned that the video from bystander mobile phones, a deputy’s patrol car dashboard camera and at least one business surveillance system does not cover every aspect of the tragic encounter.

The sheriff’s office did not respond to questions Wednesday. The sheriff has identified the officers involved as Sgt. David Weidner and deputies John DeMartini, Alyssa Lorenzatti, Joshua Wang and Bryan Watt. It has referred all inquiries to the district attorney.

According to Ebele Okobi, the video evidence does not show her brother “running in and out of traffic” when the first deputies approached him, as the sheriff’s statement said, but rather “walking on the sidewalk.”

A deputy pulls his patrol car alongside Okobi and says he needs to speak with him, to which Okobi replies softly and crosses the intersection. The deputy calls for backup and speeds around to cut him off, Okobi said, and her brother “drops his bags and puts his arms up in the air” as Lorenzatti “rushes into him.” She said her brother then “twists to the side and moves his hand up to avoid being hit or to avoid inadvertently hitting her.”

“They grab him, rip off his jacket,” she continues. “He tries to run, asking, ‘What’s wrong? What did I do?’ That’s when Deputy Joshua Wang tased him. My brother falls in the street, on his back, crying. He has the presence of mind to keep his hands in the air, even as Deputy Wang holds the taser and continuously sends volts of electricity through his prone body.”

Okobi said the deputies in the video kept shouting at her brother to “turn over on his stomach,” but never said what he’d done wrong. A few times during the scuffle he tried to break free and run, she wrote, “but they chase him, they tase him, they pepper spray him, they jump on top of him while he is prone.”

“Someone asks if my brother is still breathing,” Okobi wrote. “Sergeant Weidner keeps cheering them on, telling them to stay on him until they have crushed the life out of him. Someone shouts ‘I see blood!’ Then it’s over.”

She said the video contradicts sheriff assertions that her brother was causing traffic problems, posed a danger to deputies and assaulted an officer who approached. The family has acknowledged that Okobi suffered from mental illness, but his sister said the video does not show him acting irrationally when officers approached. Unfortunately these cases happen all too often, if you or someone you know has experienced similar, you may want to hire the help of a law firm that will be willing to take on your case, such as these Canadian based lawyers, https://diamondlawbc.ca.

Wagstaffe said his office has received hundreds of phone calls since Ebele Okobi’s post, which encouraged readers to call the DA and demand that county officials release evidence and records and immediately ban use of the Taser stun devices. Okobi also criticized Wagstaffe and the sheriff’s office for not correcting what she said is a false narrative about her brother’s death.

“She is a grieving sister and I respect that,” Wagstaffe said, adding that his office will not release evidence until the investigation is completed. A new California law that takes effect in July requires authorities to publicly release audio or video recordings of deadly police use of force within 45 days unless it’s involved in an active investigation.

The DA also said he is gathering evidence on fatalities involving Tasers, which were used in three deadly San Mateo County incidents this year. The manufacturer has not responded to questions from this news organization about the Okobi incident.

But Arizona based Axon has broadly defended its product, which police agencies have widely adopted as a tool to reduce deaths in police encounters, saying that while they are not “risk free,” they are “proven safer than batons, fists, take downs, tackles and impact munitions.”

Still, Wagstaffe expressed concern. “When you have three deaths in a year, you just can’t shrug that off.”

John Woolfolk is a reporter for the Bay Area News Group, based at The Mercury News. A native of New Orleans, he grew up near San Jose. He is a graduate of the UC Berkeley School of Journalism and has been a journalist since 1990, covering cities, counties, law enforcement, courts and other general news. He also has worked as an editor since 2013.
Follow John Woolfolk @JohnWoolfolk1

Jason Green is a breaking news reporter for the Bay Area News Group. He works week nights and spends most of his time covering crime and public safety. A graduate of UC Santa Barbara and the University of Southern California, he cut his teeth at the Inland Valley Daily Bulletin and the Palo Alto Daily News, and has been with the Bay Area News Group since its inception.
Follow Jason Green @JGreenMercNews