SF will try new approach for conservatorships for the most troubled

San Francisco may soon change the way it deals with people who drift along city streets, addled by drugs or suffering from severe mental illness.

On Tuesday, the Board of Supervisors unanimously approved an ordinance to give the city attorney authority over conservatorship proceedings, the process of forcing mentally ill people into treatment or putting them in the care of a guardian. Those cases are currently overseen by the district attorney. 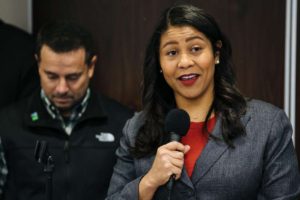 Photo: Mason Trinca / Special To The Chronicle
President of the San Francisco Board of Supervisors, London Breed, holds a press conference for plans to help mitigate activities for the annual 4/20 celebration at the Golden Gate Park in San Francisco, Calif., Tuesday, April 17, 2018.

Supervisor London Breed, who sponsored the legislation, said she wants the city to rethink its approach to involuntary psychiatric commitments. The first step, she said, is to shift these proceedings from the criminal to the civil realm.

Only conservatorships that involve a violent felony are treated as criminal cases, and those would still be handled by the district attorney under Breed’s law. But the supervisor stressed the importance of perception.

“Mental health conservatorship should not be handled like criminal cases,” Breed said. “Being mentally ill is not a crime.”

“If we do this in the context of the criminal justice system, it sends the wrong message,” he said. “We’re not trying to put people away. We’re trying to give them the care they need.”

The added staff — two attorneys and a claims investigator — would cost $717,874 a year, according to a report from the city’s budget and legislative analyst.

Breed said in an interview before the Board of Supervisors meeting that the cost was justified. Sheehy predicted that the city attorney would ultimately save the city money by creating a more efficient conservatorship system.

Mental illness is a topic of interest among San Francisco voters, many of whom are tired of watching people languish on city sidewalks in obvious despair. And Breed, who is running for mayor on June 5, isn’t the only politician to take a stand on the issue.

Sheehy is seeking tighter conservatorship laws as he fights a tough re-election campaign in District Eight. His opponent, Rafael Mandelman, has also called for stronger interventions to help people with psychiatric ailments. Mandelman’s mother suffers from a mental illness and had to give up custody of him when he was a pre-teen.

State Sen. Scott Wiener is pressing a bill in Sacramento that would allow counties to expand conservatorship laws so they apply to people who are chronically homeless, mentally ill and addicted to substances. Counties that opt in would create their own programs to provide these people with housing and services.

Last week, Breed sponsored a resolution to support Wiener’s bill, but her progressive colleagues defeated it, saying they weren’t ready to take a position.

Breed also wants to establish permanent meetings among representatives from public health, the Department of Homelessness and Supportive Housing, the Police Department, BART police, and Aging and Adult Services, who would decide what to do with severely mentally ill people who frequently wind up in jails or emergency rooms.

Also on Tuesday, the board unanimously approved Kim’s resolution to establish an LGBTQ leather cultural district in western SoMa, a gentrifying neighborhood in her district.

Kim said the area has long been dotted with shops and nightclubs that serve the leather community, including the Eagle bar and several art galleries. She hopes the cultural district legislation will lead to policies that support those businesses, not just historic name plaques on the sidewalks.