The San Francisco police hostage crisis negotiation team responded to more calls in 2016 than in any year in recent history, an uptick that officials see as a sign that the department is moving in the right direction in dealing with people suffering from mental health crises.

Officers, who volunteer to be on the team, responded to 80 calls last year, more than triple the 25 they responded to in 2013 and a 60 percent increase from the 50 they handled in 2015.

The team can be called in to any possible standoff situation, whether it involves a barricaded suspect, actual hostages or a person suffering from a mental health crisis. 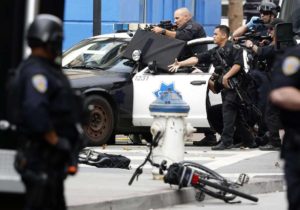 Photo: Connor Radnovich, The Chronicle
An officer tosses a nonlethal stun grenade during a July standoff with a suicidal man in the Tenderloin that ended peacefully.

The mental health calls make up the bulk of the team’s activity, in a city where police receive more than 3,000 calls a month regarding someone in an altered mental state. Police have long struggled with such calls — since 2010, more than half of people shot to death by officers had histories of mental illness or were acting erratically.

To hostage team members and mental health advocates, the increase in calls shows the effectiveness of a police push to make lethal force a last resort. That effort gained momentum after five officers fatally shot Mario Woods, a stabbing suspect who was armed with a knife but did not appear to be menacing police. His family believes that Woods was having a mental health crisis the day he was shot in the Bayview in December 2015.

“We’ve all taken to heart de-escalation, the sanctity of life and trying to negotiate a peaceful resolution so that no one needs to get hurt, either the officers or the public or the suspects,” said Sgt. Lisa Frazer, acting officer in charge of the hostage crisis negotiation team.

Among the hostage team’s cases in 2016 were calls about a suicidal man with a gun in the Tenderloin, a 13-year-old autistic boy armed with a knife in the Mission District, a 25-hour standoff in the Ingleside neighborhood with a barricaded robbery suspect, and a four-hour-long incident involving a man with outstanding warrants who was in the water under Pier 48. All the incidents ended peacefully. 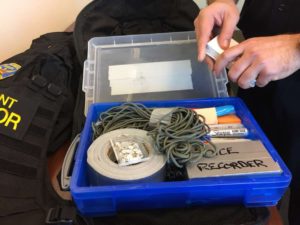 Photo: Vivian Ho, San Francisco Chronicle
Officer Carlos Manfredi displays the contents of the backpack he carries as a member of the hostage crisis negotiation team.

The department is reluctant to release details such as how many officers are part of the team, which was established in 1974, so as not to jeopardize any tactical maneuvers. But team members work full-time positions in bureaus and stations throughout the department in addition to their roles as hostage negotiators.

They undergo a 40-hour introductory course and annual retraining to maintain the mental stamina needed to handle situations that can take hours to resolve. Wherever they go, they carry a backpack containing not just hostage team vests and jackets, but such items as Sharpies and note cards that they might need to deliver messages to someone barricaded away from view.

While some officers seek to communicate with a person in crisis, others will be trying to find family members, running background checks and taking other measures that can help police defuse a situation. In an October 2015 incident, hostage team officers coaxed a man threatening to jump from a third-floor ledge by bringing his cat to the scene.

“It can be taxing, but when we get a good resolution, it is really rewarding,” Frazer said. “It reinforces all the training, it reinforces our commitment, and it reinforces the dedication of the team.”

Despite its name, only about 5 percent of incidents handled by the team involve hostages, said Officer Carlos Manfredi, a department spokesman and team member.

“Most people, when they hear hostage negotiators, they think of it from the movies,” Manfredi said. “But most of the time, it’s people in crisis or people who do not want to surrender and barricade themselves.” 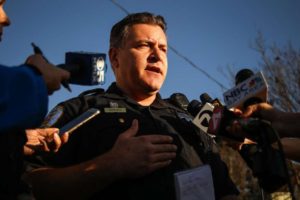 Because the hostage crisis negotiation team responds to so many instances of mental health crises, the team works hand in hand with the Police Department’s crisis-intervention team efforts.

Police have set a goal of having every officer undergo crisis-intervention training, with the eventual goal of creating a specialized team that works alongside mental health experts from the Department of Public Health. On Dec. 21, the Police Commission passed a policy to put in place a more thorough crisis-training program.

Once a specialized crisis-intervention team is operational, much of the burden will be lifted from the hostage team. Frazer said the process has already begun: In at least seven incidents in 2016, the hostage team was on its way — only to learn that the officers on scene had resolved the situation using de-escalation tactics.

“When the class was originally developed and put together, I think people viewed it as, ‘But we are already doing this,’” said Sgt. Laura Colin, who helps run the crisis-intervention training program. The key, she said, was “to frame it to the officers in terms of, ‘We know you’re already doing it. We don’t think that you’re not. We just want to fine-tune some of those skills.’

“When you frame it in that way, they understand that it’s not something being shoved down their throats,” Colin said, “that this is something they’ve been doing for five, 10, 15 years. And like any training that we do, there have to be refresher courses along the way.”

Police watchdogs are encouraged by the department’s efforts — the activist group San Franciscans for Police Accountability called them “a step in the right direction” — but some say the city needs to increase its mental health efforts so police aren’t the only ones dealing intensively with troubled people.

“It takes a whole community to find outcomes that will allow people to live dignified, stable lives,” said mental health advocate Vinny Eng, whose sister was shot to death by Los Angeles County sheriff’s deputies while she was suffering from a mental health crisis in 2012.

Police are “often conduits for meaningful outcomes,” Eng said, “but they’re not brain doctors, and these are brain diseases. We need courageous community members within city agencies to step up and say, ‘This is a real problem, and the only way to solve it is together.’”

Frazer and Colin said this was one of the most difficult parts of the job — getting help for someone in crisis, only to find them back on the street again the next week. Colin said police dealt with one person who was put on a psychiatric hold 29 times in just one year.

The Police Department is working with mental health professionals to find more permanent solutions, they said. And they’re optimistic.

“The best call is the one you get when someone says, ‘Hey, remember me?’” Frazer said. “Then they tell you a story about how they were hitting the very bottom, but you were there, you were fair, and you took care of them and got them the help that they needed.”