So many San Francisco street corners have one: the homeless person who sits there all day long for months or years, becoming part of the landscape.

At 16th and Mission streets, just outside the Burger King, the neighborhood fixture has long been Alice. The woman, who told me she was 62 one day and 65 another, has slept in the fast food restaurant’s entryway for at least three years, her belongings piled high in shopping carts and stuffed into suitcases spread all around her.

The city’s homeless outreach workers have tried many times to persuade her to move inside, and every time she has declined. She always tells them her brother or aunt or other relative is coming that afternoon to help her, but no family member comes.

On a recent afternoon, when she was asked what year it is, she answered 2006. She pulls out her hair when she’s agitated, which is often. She said that when her back pain is really bad, she can’t walk and other homeless people have to carry her to nearby bushes to relieve herself.

And yet — in the name of compassion — city officials cannot compel her to move inside, where she would be warm, and have a bed and bathroom.

Under California law, mentally ill people have the right to decline all help unless they pose an imminent danger to themselves or others or have become gravely disabled, such as not being able to feed themselves. Only then can they be held for up to 72 hours in a psychiatric ward before being released unless a judge rules they can be held longer.

In theory, the current laws give mentally ill people the power to determine their own fates. But the status quo is also leaving people like Alice on the streets in the cold to get sicker and less functional. It’s hard to find the humanity in that.

City officials are increasingly calling for a change in the conservatorship laws, which would require action in Sacramento. I told Mayor Ed Lee about Alice and asked whether it’s really compassionate to let her sleep outside, deteriorating.

“You’re describing a situation where people are not making good decisions for themselves, and they have deep mental illness,” Lee said. “I don’t think we have strong enough conservatorship programs.”

Lee could get unlikely support in seeking to change state law from one of the most progressive members of the Board of Supervisors: Hillary Ronen. She began noticing Alice during her Wednesday morning cleanups of the 16th Street BART Station plazas to highlight the unsanitary conditions there. She’s tried repeatedly to persuade Alice to move inside, but has been rebuffed. 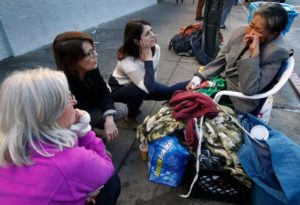 Photo: Paul Chinn, The Chronicle
Rory Ryan (left), Anne Gallagher and Supervisor Hillary Ronen visit with Alice, a homeless woman who said she has lived in front of a Burger King for 10 years.

Ronen said she’s touring the city’s mental health facilities and will call for a hearing early next year to understand how the mental health system works and what stronger conservatorship programs would look like.

“I want to look at the entire system and understand how it works,” she said. “This is so sad — I just can’t believe it.”

Barbara Garcia, director of the city’s Department of Public Health, said it’s a complicated balancing act to respect people’s civil rights but also ensure they get the treatment they need. She said she wants the Superior Court to open up conservatorship hearings to the public so judges can hear from people besides just the mentally ill person and lawyers for both sides.

Jeff Kositsky, the director of the city’s Department of Homelessness and Supportive Housing, also supports changes to the conservatorship programs. He’s been trying to convince a mentally ill homeless man in his neighborhood to accept help for three years and hasn’t made progress.

“It’s a really complicated issue, but I think we have to come up with a better idea,” Kositsky said. “Not to figure out how to take away people’s rights, but how to better serve people who are not accepting services that would really benefit them.

“I do know what does work, which is loving and compassionate and persistent outreach and building relationships with people,” he continued. “In most cases, that eventually works.”

That was the case with Alice — almost.

A volunteer in Ronen’s office began her own personal outreach mission with Alice. Anne Gallagher, a retired teacher of severely emotionally disturbed kids, began visiting her most days, imploring her to accept help. Gallagher estimates she asked Alice to move inside 60 times and was brushed off 60 times.

The women did form a bond, though. Gallagher brought Alice a jacket, a cushion, tea and shrimp fried rice from the nearby Chinese restaurant. Alice started calling Gallagher her best friend.

“If I don’t go, she’s like, ‘Where were you?’” Gallagher said. “You can’t wake up in the middle of the night hearing the rain and not think of her.”

I visited Alice twice with Ronen and told Alice I was a journalist with The Chronicle. She said once she didn’t want to move inside because she didn’t want to give up her massive amount of belongings. The second time, she said her aunt was coming later to help her.

She said she moved from the Philippines as a 20-year-old, newly married to an American man. She said they never had children and later divorced. She said she’s been homeless for 10 years and sleeping outside Burger King for three months. The restaurant’s assistant manager said she’s been sleeping in the entryway the entire three years he’s worked there, leaving a mess for the staff to clean up every morning.

On the morning of Nov. 29, Ronen and Gallagher sensed an opportunity. Many of Alice’s belongings had disappeared overnight, and the women thought the loss might help prompt her to accept a bed.

“If you move inside, we can protect all your stuff,” Ronen told her. “You’re not safe out here.”

Ronen called Garcia, who found a respite bed for Alice and transportation to get her there, the supervisor said. Still, Alice refused. Finally, hours later, Alice said she would sleep at a drop-in center. She did go there and slept in a chair for many nights, continuing to refuse to move into a bed.

Gallagher visited her friend there regularly. She went again on Monday morning, but Alice was gone. She’d left the day before. Gallagher went to Burger King, but Alice wasn’t there either. They were still looking for her late Monday.