When Bay Area resident Robert Bisno learned his ex-girlfriend was arrested in Georgia earlier his year, Bisno had no way of contacting her or verifying the status of her incarceration.

The lack of information available about her arrest was particularly troubling because his ex-girlfriend has struggled with mental health issues, including suicide attempts.

“Nobody could even tell me if she was alive or dead,” Bisno, 34, recalled.

Bisno said he eventually learned his ex-girlfriend was incarcerated and awaiting trial, but only after receiving help from a former inmate who knew how to navigate the jail system.

But Bisno’s challenge in locating an incarcerated loved one is by no means an isolated incident.

That’s why the San Mateo County Sheriff’s Office has launched a new online inmate locator tool, designed to make it quicker and easier to learn the status of individuals who might have been arrested or incarcerated in San Mateo County. 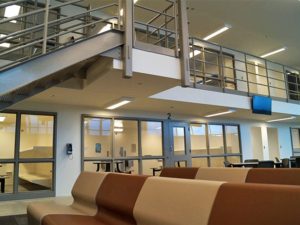 The inmate locator is intended for residents who have incarcerated family members, said Sheriff’s Office spokesperson Salvador Zuno. He noted crime victims who want to keep track of individuals who victimized them could also use the new tool.

Most arrestees will appear in the online database within one to two hours of being arrested, Zuno said. Those requiring medical attention might take longer to be entered into the system.

The locator tool appears to reliably find inmates with as little information as a first initial and last name, according to testing conducted by the San Francisco Examiner. However, spelling errors can prevent an inmate from showing up in search results.

“In any 24-hour period, we’ll get hundreds of guests in our lobby asking about their family members,” Zuno said. “By allowing some of those people to access the information online, this tool gives jail staff more one-on-one time with those guests who need it.”

Criminologist Marina Bell agreed contact between inmates and their friends and relatives outside jail can be crucial.

“The research demonstrates one of the strongest factors for people being successful at reentry and avoiding recidivism is having a positive support network, and if that’s how this new tool is used, I would say that’s progress,” Bell said.

But Bell noted the tool could have some drawbacks. Making personally identifiable incarceration data so readily available, for instance, could further marginalize current and former prisoners, she said.

“I think the intent sounds excellent,” Bell said. “But I would have concerns about how else it might be used, and by whom, and what their intent might be.”

Zuno noted the database contains no sensitive private information, and only allows users to access data that is already a matter of public record. That information includes an inmate’s location, pending charges, custody status, next court date and bail, if applicable.