S.F. treatment center for homeless and mentally ill finally opens in the Mission after year of delays.

A 30-bed facility for those struggling with extreme mental illnesses and drug use finally opened in the Mission District on Tuesday, following more than a year of delays that underscore San Francisco’s challenges in expanding services for its most vulnerable. 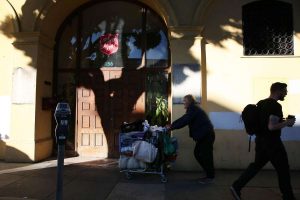 A man pushing a shopping cart and a pedestrian walk past the Salvation Army building at 1156 Valencia Street on Monday, February 3, 2020 in San Francisco, Calif. A 30-bed facility for people struggling with extreme mental illnesses and drug use finally opened in the building Tuesday, following more than a year of delays underscoring San Francisco’s challenges in expanding services for its most vulnerable.
Lea Suzuki/The Chronicle

The hope is that the new site — called Hummingbird Valencia — will ease the burden in the emergency room, where the city’s homeless often cycle through. The program, located in a Salvation Army building at 1156 Valencia St., will be San Francisco’s second psychiatric respite center.

“These beds represent one more step toward meeting the city’s acute need for exits from the streets, emergency rooms and jail for unhoused people with behavioral health needs,” Supervisor Rafael Mandelman, whose district includes the site, said in a statement.

The program is intended for those on the streets who are in the midst of a psychotic episode — or just need somewhere safe and calm to rest for a few hours or days. People will likely be referred to the site either from the hospital or from emergency responders, like the city’s new Street Crisis Response teams.

Valencia Hummingbird will also offer people food, medical services, a place to charge their phones and store their belongings, and access to showers and laundry. Clients are then either connected to other long-term services or discharged back to shelters or the streets.

The site has one large room with a couple of reclining chairs, where people can rest for a few hours. Two other large rooms in the building have several cots, where clients can stay overnight. The average stay at the original 29-bed Hummingbird was 14 to 17 days.

The S.F. General Hospital Hummingbird, which opened three years ago, has served more than 12,000 clients during the day and 1,000 people overnight, according to city data. It’s unclear how many of those people were repeat visitors.

Officials widely agreed that the city desperately needed another Hummingbird, as more than 4,000 people struggle with homelessness, mental illness and drug addiction on the city’s streets. That number has likely increased amid the pandemic, though it is unclear by how much.

The Valencia Hummingbird will be the first of its kind in a residential and retail neighborhood, which is surrounded by homes, bars, restaurants and small shops. Melida Solorzano, program manager for the original Hummingbird who is helping launch the new site, said she’s already noticed some people regularly in the neighborhood who would likely benefit from the site.

“It’s important to be in the community,” she said. “We’re trying to meet the clients where they are.” 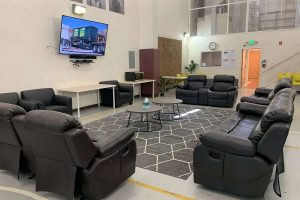 But despite the need, the city still endured more than a year of delays to finally open a second site. When officials announced the Valencia Hummingbird in February 2020, they planned to open it within a few months.

But the pandemic and unexpected construction delays hobbled their efforts.

That frustrated many, including Mandelman, who said the delays were emblematic of how long it takes the city to make even incremental changes to its system of care.

Meanwhile, the projected cost of repairs and upgrades jumped from $300,000 to over $700,000. The Salvation Army said it would pay for the increased costs, while the nonprofit Tipping Point Community gave the city a $3 million grant to help with ongoing costs.

The new site will also open at reduced capacity due to the pandemic. It was originally planned for 30 overnight beds and 25 daytime beds, but will instead have only 26 overnight beds by the end of June. The site at SFGH similarly stopped accepting day guests during the pandemic, but plans to resume in the next few weeks. Theo Ellington, director of homeless initiatives at the Salvation Army, said he was not sure when — or whether — the Hummingbird Valencia site would ramp up to full capacity.

“Accounting for adequate social distancing may very well be our new reality,” he said. “It’s hard to tell what normal will look like in settings like this.”

Still, Brett Andrews, CEO of PRC/Baker Place, the nonprofit that will run the program, said the new site is an “essential step” in providing “critical services to our most vulnerable citizens at a time of such profound need.”