Toney Chaplin, the interim chief of the San Francisco Police Department, calls for the public to comment during a town hall meeting at the San Francisco Scottish Rite Masonic Center on Thursday, Oct. 20, 2016 in San Francisco, Calif. Police officials spoke about the the fatal officer-involved shooting of a man who allegedly shot and critically injured an S.F. police officer on October 14. 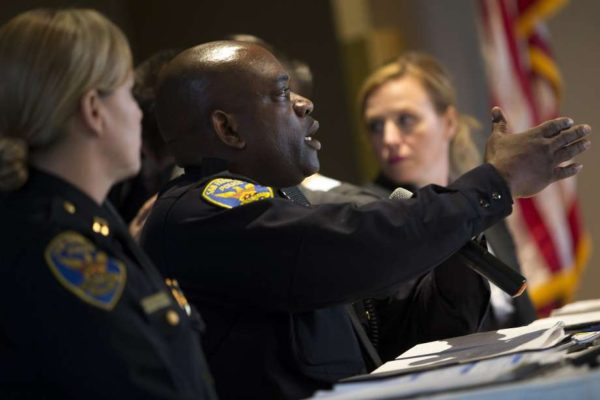 Photo: Santiago Mejia, The Chronicle
Toney Chaplin, the interim chief of the San Francisco Police Department, calls for the public to comment during a town hall meeting at the San Francisco Scottish Rite Masonic Center on Thursday, Oct. 20, 2016 in San Francisco, Calif. Police officials spoke about the the fatal officer-involved shooting of a man who allegedly shot and critically injured an S.F. police officer on October 14.

Acting Police Chief Toney Chaplin and a panel of officials hosted the meeting at the Scottish Rite Masonic Center at 2850 19th Ave., less than a mile from the site of the shooting near Lakeshore Plaza Shopping Center last Friday that injured Officer Kevin Downs.

The mood was calmer than at past meetings following officer-involved shootings. Several residents thanked officers for keeping them safe, although at least one raised concerns about the use of force, and several expressed worry about gun violence in the city, particularly in light of Tuesday’s shooting outside June Jordan School for Equity that injured four students, one critically.

Chaplin said the department remained committed to working with the Department of Public Health on best practices for responding to the mentally ill.

“We’re looking at strategies to deal with these situations,” he told the crowd. “It’s a huge issue, it’s a national issue. It really is a tough one to crack.”

The gunman, 26-year-old Nicholas McWherter, died Sunday from his injuries. His family released a statement Wednesday saying McWherter had a strong heart and faith but had struggled with mental illness.

Cmdr. Greg McEachern gave an updated account of the incident, saying McWherter began firing the second Downs exited his patrol car, and that it appears no words were exchanged.

He also said police have obtained video of a confrontation between McWherter and a security guard, who pepper-sprayed him twice inside Big 5 Sporting Goods before police responded.

Investigators said they know how McWherter obtained the .22-caliber gun used in the shooting but would not inform the public, citing an active investigation.

Police shot McWherter about an hour after he opened fire on officers on Everglade Drive near Lakeshore Plaza Shopping Center around 8:15 p.m. Police said Thursday the shots fractured Downs’ skull, missing a main artery by less than a centimeter. His right leg was paralyzed and he lost some use of his right arm.

According to police, officers arrived at Lakeshore Plaza Shopping Center after receiving a report of a man threatening people and acting erratically. The security guard who had pepper-sprayed McWherter pointed the officers toward him on Everglade Drive. Downs drove a patrol car in front to intercept McWherter, who began firing toward the car as soon as he exited.

The gunman then fled across Sloat Boulevard into Stern Grove.

About 9:15 p.m., officers spotted McWherter running near the end of 28th Avenue. When officers caught up to him inside a wooded area on 28th Avenue near Vicente, McWherter fired shots and officers returned fire. It appears two officers shot 22 rounds, striking McWherter four times, McEachern said.

McWherter fell to the ground, kept a gun near his chest, and refused to surrender despite police commands, police said. Officers moved back, used a “distraction device” and took him into custody within 20 minutes of the initial shooting.

Thursday marked the first police town hall meeting since the May 19 shooting of unarmed Jessica Williams, which led to Chief Greg Suhr’s resignation.