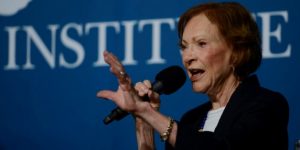 In Honor of International Women’s Day, former first lady Rosalynn Carter answered a series of questions about her experiences in the movement for women’s rights.

What were things like for women when you first entered the public spotlight?

When I was in school, I hoped I would get married, if I were lucky, and be a nurse, a secretary, a schoolteacher, or maybe a librarian. Those were about the only options for even a college-educated woman.

My horizons expanded when I met Jimmy, and I traveled the world as the wife of a Naval officer. Later, when he became governor, I pushed my limits: making speeches as Georgia’s first lady, which I did out of sheer determination; facing and dealing with public criticism while staying secure within myself; learning that I could make a difference by pursuing the issues I thought were important and tapping the people who could help me most; campaigning all over the country when he ran for president and serving our country as first lady. 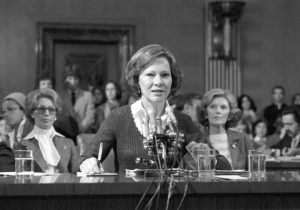 In the 1970s, displaced homemakers — women who were thrust into the workplace without any skills — were a big concern; domestic violence shelters were just getting started; women made 59 cents for every dollar made by men; Title IX — nondiscrimination in sports — was just beginning to be implemented.

Are there things you’ve seen women do in your lifetime that you never would’ve imagined when you were young?

When Jimmy was president, he appointed more women to public office than all the previous presidents combined. Women have gained power, but sometimes it is still limited. They have taken places in the political and public world, and it is no longer unusual to see women who are astronauts, CEOs of big companies, great athletes, secretaries of state, governors, and heads of state.

American women have increasingly realized — as have men — the impact our opinions have in the voting booth and the marketplace. We have united to impact politics and policy, but also importantly to use our influence to help the poor, the oppressed, and those who suffer from mental or physical illnesses.

What was your biggest disappointment in the fight for women’s rights?

I was a strong advocate for the Equal Rights Amendment, which would have written equal rights for women into our Constitution. Of all the projects I worked on, my greatest disappointment was the failure to achieve ratification of the ERA. At the end, there were only 13 legislators who held it up. Jimmy and I tried hard to get them to change their minds. I am glad there is a renewed campaign to pass the ERA called “Equal Means Equal.” I hope it succeeds this time around.

Although there has been progress, women still struggle to take their full, rightful places in politics, the media, business, and athletics. 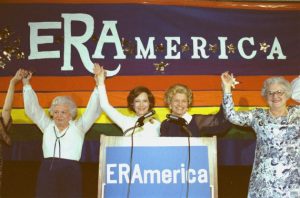 When you travel globally, what sort of gender inequalities do you see worldwide?

My husband and I have visited many of the more than 80 nations where The Carter Center has worked to improve peace and health for the poorest people. Along with the growing gap between the rich and the poor, the most serious challenge we see is the deprivation and abuse of women and girls. Jimmy wrote a book about that in 2014.

These abuses often are justified by false interpretations of religious texts, and normalized by a growing tolerance of violence and war worldwide. When women are seen as inferior to men in every way, girls and women are vulnerable to rape and other sexual abuse, newborn girls are killed, female fetuses are aborted, genital mutilation occurs, women are trafficked for sex and domestic labor. The magnitude of the global problem is staggering.

And then economic discrimination still keeps women in poverty and dependent on men. Not only does this degrade people and cause them to suffer, but whole economies are held back because so many women on earth are not allowed to contribute their talents.

What does The Carter Center do to help women?

Our Mobilizing Action for Women and Girls Initiative works directly with religious and traditional leaders to achieve better treatment of women and girls. It emphasizes justice-based interpretations of religious texts and creates teaching materials about human rights and gender equality. 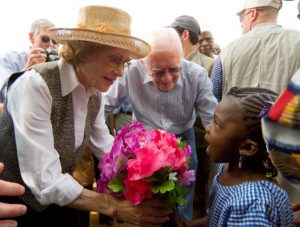 Several of the diseases the Center works to prevent affect more women than men. Trachoma is an example. Children are very susceptible to that eye infection, and they pass it on to their caregivers, who are their grandmothers, mothers, girl siblings, and other women. So when we make progress against trachoma and other diseases, women tend to benefit more.

One area of focus for me is mental health. Certain mental illnesses — depression and anxiety disorders, for example — strike women almost twice as frequently as men. In addition, as with physical health, the greatest burden of caring for those with mental illnesses falls on women. I created the Mental Health Program at the Center and the Rosalynn Carter Fellowships in Mental Health Journalism to encourage proper understanding of these illnesses.

We also have a Global Access to Information Program that empowers men and women to exercise their right to obtain the information they need from the government to prosper themselves and hold their leaders accountable. It has a special focus on women, because public servants don’t take them seriously, or because their husbands control their comings and goings, or simply because they have too many housekeeping and childrearing responsibilities to find time to seek out information.

On International Women’s Day, what do you wish for the women of the world?

All images courtesy of The Carter Center. http://www.huffingtonpost.com/former-first-lady-rosalynn-carter/international-womens-day_b_9405192.html