Respite from the streets for the most challenged

People suffering from mental illness and drug addiction will get a boost from the city when San Francisco opens its latest Navigation Center for homeless people on Wednesday. Located at San Francisco General Hospital, the Hummingbird Psychiatric Respite Navigation Center will be the city’s first dedicated to helping a segment of the homeless population that has particular difficulty finding stable housing. 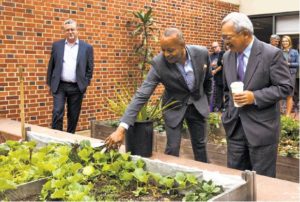 “As we’ve been able to expand Navigation Centers in the city, we’ve been able to articulate different needs that our system has, and this is clearly an important gap to be filled in our system, one around behavioral health and providing care to people in that kind of crisis,” said Sam Dodge, a deputy director at the city’s homelessness department.

Beginning Wednesday, the Hummingbird Center will offer four overnight beds to eligible adults who can be referred there from a number of city health agencies and the Department of Homelessness and Supportive Housing. The center will open another 11 beds in December.

On a tour of the facility on Tuesday, Mayor Ed Lee said he sees the center as a place where the city’s most vulnerable homeless people can find a clean, calming space to begin to recover and move toward more stable housing.

“We need more of these places for people to have sustained support,” Lee said. Opening the center, he added, “is in recognition of the need to pay attention to behavioral health” and how it relates to the city’s chronic homelessness problem. “That’s the issue of our time,” he said.

Mason Trinca / Special to The Chronicle
The courtyard at the Hummingbird Navigation Center at San Francisco General Hospital is surrounded by green.

Lee has previously called for “several hundred” more psychiatric beds for homeless people suffering from acute mental health disorders. The city has about 400 public psychiatric beds, although 250 of those are located outside of San Francisco in nursing facilities or hospitals that contract with the city.

As with the city’s four existing Navigation Centers, Hummingbird will be operated by a nonprofit organization selected by the Department of Public Health. The Positive Resource Center, which has a long history of providing residential mental health rehabilitation services, was chosen and awarded a $1.5 million, one-year contract.

Kelly Hiramoto, director of the San Francisco Health Network’s Transitions program within DPH, said the new center is intended for those finding it increasingly difficult to live on the streets because of addiction or worsening mental health conditions.

Hummingbird’s approach may prove to be more successful, Hiramoto said, because of its low-pressure, unstructured approach to providing respite care. People can be disinclined to give up the life they’ve become accustomed to on the streets, she said, however hardscrabble it may be. Rather than immediately confronting people with the choice of returning to the streets or entering more rigorous treatment like a live-in program, Hummingbird aims only to provide a safe environment for individuals to weigh their next steps.

“Bombarding someone and saying, ‘Do you want to come to my center to learn to manage your medications and understand your illness and pay your bills and get a job?’ — that’s so overwhelming to many people. It’s a window of opportunity to show them there are other options to going back on the street,” Hiramoto said.

Anyone who spends time at the center will do so voluntarily, and city health officials anticipate the average stay at Hummingbird to be two weeks. During that time, the center’s staff will work to find more stable living arrangements for those who come through Hummingbird’s doors. Many are expected to be referred to Hummingbird after being discharged by S.F. General’s psychiatric emergency care unit.

Excluding the costs of nine staff members and supplies, operating a facility with only 15 beds at a cost of $274 per bed per day might seem like an expensive endeavor for the city, particularly compared with the city’s four other Navigation Centers, where the cost is usually closer to $100 per bed per day. But health officials say it will be well worth it, especially compared with the outsize costs of treating mentally ill or drug-addicted homeless people in hospitals.

Administering psychiatric emergency services at S.F. General, for example, costs $1,483.13 per visit, according to data from the city’s health department. While Hummingbird won’t be a substitute for acute, emergency psychiatric care, it will allow the city to divert people who pose little threat to themselves or others away from the most cost-intensive services, said Brett Andrews, Positive Resource Center’s executive director.

“All of this is in an effort to create a safe space for an individual to be thoughtful and contemplative about what their next steps are, and be able to consider all of that in a clean, safe environment,” Andrews said. “At Hummingbird, we can say, ‘Here’s a lower level of care and a resource for you,’ and it’s one that will not be as heavy a drain on the system and on our most acute and costly services.”

The overnight beds will complement the daytime drop-in services that have been offered at the center since 2015, including meals, showers, basic hygiene supplies, laundry facilities and social activities.

Hiramoto said that now, rather than being discharged from a hospital and moving right back to the streets, homeless people can find an interim step at Hummingbird.

“This is a way to say, just spend the night, crash here, take a shower, wash your clothes and see how you feel in the morning,” Hiramoto said. “And that gives you many more opportunities to work with a person. That’s why the overnight beds are so ideal. Right now we have nowhere for them to try. There are few places where they can just rest and get better.”