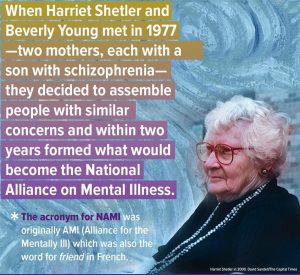 Harriet Shetler has passed away at the age of 92. (2010) She helped found the organization that eventually became the National Alliance for Mental Illness (NAMI), and was a tireless advocate on behalf of people with mental health concerns. It’s no wonder — her son had schizophrenia.

Today the organization Mrs. Shetler helped start, the National Alliance on Mental Illness, has affiliates in every state and more than 1,100 communities. It offers support to the mentally ill and people living with them; promotes research and education on mental illness; and lobbies governments on mental health concerns.

NAMI was formed in 1977, when Shetler and Beverly Young, a mother who also had a son with schizophrenia, met over lunch to discuss the similar challenges they shared raising a child with a serious mental illness.

Mrs. Shetler suggested a name, Alliance for the Mentally Ill, partly because its acronym meant “friend” in French. (The name was later changed slightly to broaden its scope.) Within six months, 75 people had joined.

It met with a similar organization formed in California, and held its first national conference where over 250 people showed up — nearly 10 times more than they had planned for. Since then, NAMI has largely been a force for good in the advocacy of information about mental health issues, equal treatment and access to treatment, and helping people navigate the mental health system in their community.