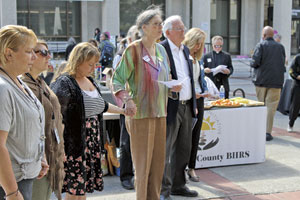 Bill Silverfarb/Daily Journal
A national day of prayer for behavioral health and understanding was held at the County Center in Redwood City Tuesday.

Mental illness and addiction touches nearly everyone but they’re not generally topics of discussion at the water cooler.

Tuesday, however, Christians, Muslims, Buddhists, Hindus, Native Americans and others joined together with officials with the county’s Behavioral Health and Recovery Services to bring attention to the issue and offer prayers for recovery at the County Center in downtown Redwood City.

“There is a climate occurring in this country that seems to divide and pull us apart. Coming together today is a powerful message about unity,” said Steve Kaplan, director of Behavioral Health and Recovery Services.

Tuesday was a “National Day of Prayer for Behavioral Health and Understanding” across the country and in San Mateo County for the first time.

Kaplan’s department has a program called the “Spirituality Initiative” that partners with the interfaith community to help individuals find a pathway to recovery. 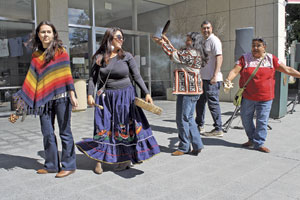 Tuesday’s event featured information tables from organizations including the National Alliance on Mental Illness, the Native American Initiative, Islamic Network Groups and the David Lewis Re-entry Center among others.

There is a stigma around the diagnosis that is not often spoken about, said Helene Zimmerman, executive director of NAMI.

“The role of spirituality is a key component to health and well-being,” Zimmerman said.

Lily Nasar, programs assistant at the Islamic Networks Group, spoke about how often the problem of addiction and mental illness is ignored in the community.

“There are misconceptions that mental illness is caused by a lack of faith,” she said.

Pacifica resident Mary Bier told her personal story of recovery at the event. After suffering a back injury, Bier became addicted to Vicodin.

“I was afraid to ask for help. I didn’t want to lose my job or reputation,” she said.

Through a 12-step program, she renewed her relationship with God and credits the Pacifica Resource Center for helping her recover.

Pamela Grant then led participants in meditation based on the teachings of Buddha.

Dr. Dilip Amin with the Sanatan Mandir Hindu Temple closed the event as a group of faith leaders gathered around him.

Prayers were spoken throughout the event.