Officer Matthew Sheedy received an award for his lifesaving service from the Pacifica Police Department and Pacifica City Council at the May 9 City Council meeting. 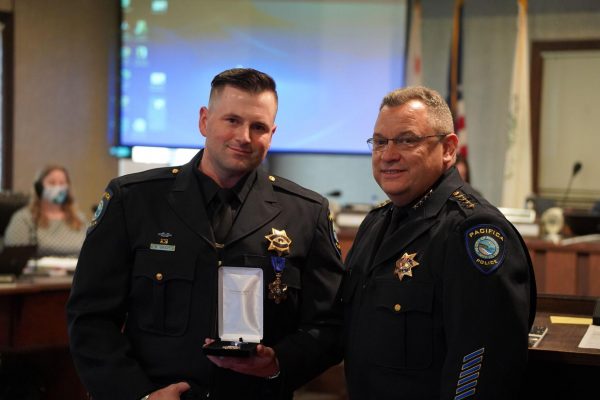 Sheedy responded to the call about a man having a mental health crisis and was attempting to make contact at the door, where he could hear the screams of a man inside the residence, Police Capt. Bill Glasgo said.

Sheedy called for emergency medical personnel and instructed an officer to put pressure on the wound to stop the bleeding, Glasgo said. As Sheedy was inspecting the wound, he learned the man had just stabbed himself with a knife through his arm, possibly puncturing a major artery. Sheedy ran into the house and grabbed a towel to wrap the stab wound, Glasgo said.

When medical personnel arrived on scene, Sheedy was able to provide a complete update of his actions. A North County Fire Authority captain who was on scene said if it wasn’t for the quick actions of Sheedy, the man could have died due to the large amount of blood lost, said Glasgo.

Sheedy is being commended for his quick actions and lifesaving measures, Glasgo said.

Sheedy thanked his family, everyone in the police department and City Council when he received his award. City Council members said it was he who deserved their thanks.

“You are a model for what service looks like,” said Councilman Tygarjas Bigstyck. “Thank you.”