Gov. Gavin Newsom is backing a sweeping proposal to overhaul California’s mental health care system and end homelessness for the sickest people living on our streets. But his plan to make treatment mandatory is facing pushback from opponents who argue it’s an inhumane and ineffective solution that will do little to solve the state’s homelessness crisis. 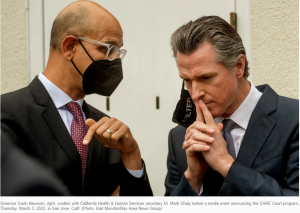 Senate Bill 1338, dubbed Community Assistance, Recovery & Empowerment (CARE) Court, would allow California courts to order people with severe, untreated schizophrenia and other psychotic disorders to submit to a care plan. The goal is to help people who can’t help themselves — people who are wandering in traffic, shouting at no one, and bouncing between hospitals, jail and the streets.

The proposal comes at a time when Californians increasingly are fed up with the state’s wide-spread homelessness, and Newsom has prioritized eliminating encampments. But in a system where nearly all available mental health services are voluntary, CARE Court raises a controversial ethical question: should society force treatment on people who are too sick to realize they need help?

Opponents say coerced treatment is unjust and less effective than building trust with someone and convincing them to get help. Court should be a last resort, said Kim Pederson, a senior attorney with Disability Rights California, one of dozens of agencies opposing the idea.

“I can tell you that these folks that the state wants to serve via the CARE Court process have a lot of trauma around courts,” she said, “and do not see courts as a place where they can get help.”

But supporters argue some people will never accept desperately needed assistance without a court’s intervention.

The bill, which cleared its first two legislative committee hearings last week, raises a number of other questions that have yet to be answered. Where would homeless CARE Court participants live, particularly in places like the Bay Area that are grappling with an extreme shortage of affordable housing? If someone already is refusing help, would a court order really be enough to get them to take their medication and follow a treatment plan? Do counties have the funding, staff and housing to make this sweeping change a success?

“People are fed up and they want something done,” said Mike Herald, director of policy advocacy for the Western Center on Law & Poverty, which opposes the bill. “It’s just that what we’re proposing to do is highly unlikely to work.”

If SB 1338 is approved, people with severe mental illness could be referred to CARE Court by family members, first responders, county mental health officials, hospitals or clinicians. The court would then order a clinical evaluation of the patient. If a judge decides they are eligible for the program, the patient would be ordered to work with a trained “supporter” to develop a care plan. Participants, who would be represented by a public defender, would be required to follow a plan for their mental health and substance abuse treatment, medication and housing.

To make this work, the state would have to come up with new funding for the courts, public defenders and “supporters.”

Care plans would last one year, and could be extended for an additional year. If a participant does not comply, they could be placed in a more restrictive conservatorship in a locked facility, or jail if they have a pending criminal case. But participants cannot be forcibly medicated or jailed solely for noncompliance.

The National Alliance on Mental Illness, the California Medical Association and California’s Big City Mayors — led by Oakland Mayor Libby Schaaf — all support CARE Court. But the ACLU and other opponents argue it won’t give people what they need most — housing. Though the bill says participants should be offered a housing plan, it doesn’t hold anyone accountable for actually providing that housing.

“Housing is an area that has to be addressed,” Sen. Umberg acknowledged. That might mean giving CARE Court participants priority for a region’s limited units. He’s open to an amendment that would require counties to provide housing. The bill already proposes to fine counties up to $1,000 a day if they fail to provide mental health services to participants.

Graham Knaus, executive director for the California State Association of Counties, thinks cities and the state should be held accountable too — not just counties.

“Sanctions make absolutely no sense on counties when we have limited authority, we don’t control or zone for housing in the areas where it’s needed, and there’s no new or ongoing funding for this program,” Knaus said.

The state has made $10 billion a year available for mental health and addiction treatment, Newsom allocated $12 billion for homelessness services last year, and he wants to spend another $1.5 billion to house people with mental health needs. But that doesn’t erase decades of underfunding, Knaus said. He’s heard from some counties — particularly in rural areas — that say they don’t have the workers or infrastructure to implement CARE Court.

Scott Gilman, director of San Mateo County’s Behavioral Health & Recovery Services, is enthusiastic about the legislation. The county, which plans to end homelessness this year, has the resources to comply, he said.

But he’s anxious about how the bill might change.

“I’m worried that the bill as it goes through the process is going to be watered down,” Gilman said, “and will become so full of red tape that we will have responsibility without the ability to really do much differently.”

Patricia Fontana, a Berkeley resident and member of Families Advocating for the Seriously Mentally Ill, also supports CARE Court, but worries it doesn’t have enough teeth. She wonders how it would help people who refuse medication.

Even so, if it passes, Fontana wants to enroll her 38-year-old son, who is diagnosed with schizoaffective disorder. The existing mental health system has failed him, leaving him caught in a vicious cycle of brief hospitalizations that don’t lead to lasting improvements. He recently went missing after refusing to continue his medication.