Opinion: A father’s greatest gift — talking to his son about mental illness

Americans know far more about mental health than 60 years ago, but attitudes have hardly budged since the 1950s

Father’s Day is the time to remember and celebrate our dads.

My own father was a philosopher who studied with Bertrand Russell and Albert Einstein. He was my go-to person as I grew up in the Midwest, during a seemingly idyllic university life. 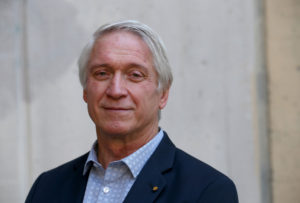 Author and psychology professor Stephen Hinshaw is photographed outside Tolman Hall on the UC Berkeley campus on June 12, 2017, in Berkeley, Calif. Hinshaw’s new book, “A Different Kind of Madness,” is a memoir of growing up with his mentally ill father. (Jane Tyska/Bay Area News Group)

Yet he disappeared, without warning, for 3, 6, or 12 months at a time. No one ever discussed it, when he was present or when he was gone. I had no idea that he was locked up in barbaric mental hospitals, for what were thought to be repeated bouts of chronic schizophrenia.

His doctors had ordered complete silence, telling him and my mother that disclosing the facts would permanently destroy their children — my sister and me. Would an oncologist tell parents never to disclose cancer to the children? It’s unthinkable. But regarding mental illness, the shame and toxicity were believed to be so great that the entire topic was deemed off limits.

Like most kids in situations of silence, I took on the blame, wondering what I’d done to cause his absences. Mom heroically held the family together. Finally, during my first spring break from college, Dad pulled me aside and revealed his bouts of chaos amidst his life’s achievements. His first episode had occurred when he was 16, when he jumped from the roof of his family home with the grandiose belief that he was saving the free world from the oncoming Nazi threat. The hospital stays he endured were tortuous.

After hearing his life story, I quickly switched my major to psychology and, following graduation, helped diagnose him correctly with bipolar disorder. But I’d internalized the shame myself — remaining closed off about the issue and fighting the terror that I would follow in Dad’s footsteps and end up hospitalized. Finally opening up to support and therapy, I became dedicated to clinical psychology. I’ve spent my life working with and researching kids and families, also aiming to reduce the huge stigma pervading the entire topic.

Americans know far more about mental health than 60 years ago, but attitudes have hardly budged since the 1950s. In fact, over two times more of us now believe that mental illness is associated with violence, related in part to stereotyped media images. And without access to care, the vicious cycle becomes self-perpetuating for far too many individuals and families.  The key paradox here is that although cures don’t yet exist, treatment greatly aids recovery.

Dad and I kept talking, several times per year, for the rest of his life.  I learned more about the inaccurate diagnosis and misguided care he’d received, along with his lasting belief that he had caused his own episodes through moral failings.

Progress is at hand: People are now discussing mental health more openly, particularly with family members like parents. Pursuing therapy is increasingly viewed a sign of strength, not weakness. Yet disclosure of mental disorder can still prevent people from renewing a driver’s license, serving on a jury, or maintaining child custody. The road ahead is long.

As for policy, we must continue to fight for mental health parity and enforce anti-discrimination laws. A more humanized set of media images is also necessary. Investing in evidence-based treatments will yield major long-term savings and ease the tragic personal and family-related burden of mental disorders. A stance of compassion will fuel our success as a species.

Mental health is the last frontier for human rights. We all lose by remaining silent and allowing stigma to fester. My father’s greatest gift — his disclosure — helped to turn the tide and ensure that our family will remain silent no longer.