San Francisco Mayor Mark Farrell complained last week that “resistant” homeless people remain camped on our streets despite numerous offers of shelter and services. The word “resistant” suggests that homeless people are stubbornly saying, “No, really, I love it here in my tent on the sidewalk, exposed to the elements, with no toilet, no way to keep clean and a daily struggle to survive.”

Does he honestly believe people don’t want permanent housing? Try guaranteeing housing — affordable, safe, clean and decent housing with support services, rather than a 30- or 60-day stay at a navigation center — and see where these “resistant” people end up. 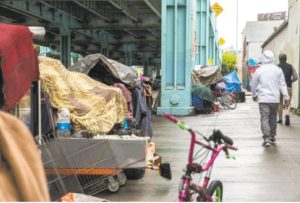 Jessica Christian / The Chronicle
A homeless encampment along 13th Street last month in San Francisco. With no guarantee of permanent housing, many homeless people believe the street is their best option.

To those of us with the advantages of a living wage, housing and adequate psychological stability to cope with our stressors, it may be unimaginable that a person would choose life on the street over a stay in a shelter. But among those “resisting” shelter offers are people whose severe mental illness and/or untreated responses to trauma (e.g., rape, robbery, assault and prison experience) make it impossible to tolerate group living in close quarters.

Along with these personal barriers are the logistical problems of accepting temporary shelter. Those who stay at a navigation center for the granted period are not guaranteed supportive housing when their time is up. Upon entry, they must give up all but two bags of belongings. This means giving up the things they need to survive on the street. By ignoring these barriers and mislabeling homeless people with the term “resistant,” we create a population that can be blamed, criminalized and punished for not wanting to take down their tent or structure.

People with substance-abuse disorders don’t do well in a shelter setting. It can be difficult to work with a case manager while staving off withdrawal. Shelters and navigation centers can set people up for failure, and some of the people who Mayor Farrell seeks to move have been through the drill before.

There are more homeless people than affordable housing units. The demand for permanent, affordable, supportive housing far exceeds the supply, leaving people with nowhere to go. Temporary shelter is hard to come by, as well. Shelters are full, with long waiting lists (1,038 people on the 311 Shelter List as of April 22).

Navigation centers are mostly full, and unless one is a veteran or meets the San Francisco Priority One requirement of 13 documentable years of homelessness, that person will get a 30- or 60-day stay and return to living on the street.

So we have people living on the street, and now Mayor Farrell is going to clean up by aggressively moving one set of people out of one neighborhood and somehow preventing the return of those or any other homeless people to that area. But those who do not move into shelter or who exit navigation after a 30-day stay will not disappear from our streets. They will return to the places they know best, or if the pressure is too great, go to other neighborhoods.

Farrell’s actions bypass the federally endorsed, best-practice encampment-resolution process developed by the San Francisco Department of Homelessness and Supportive Housing, itself funded by the Mayor’s Office and staffed by people with years of experience in the field. Mayor Farrell is revealing and even acknowledging what homeless people know through experience, and what advocates and service providers have feared.

We have moved from a place of compassion to a one of political exigency. Demonstrating political will by punishing people is now legitimized as part of the political discourse, turning up the volume on the eve of a mayoral election and ensuring that Mayor Farrell “makes his mark” while in office.

It is unacceptable that people live on the streets in tents, strung out along a fence line. It is worse to punish them because we — as a community, a society, a nation — have not found the political will to provide housing that works for people with very low income and complex needs. We can’t bear to see the visible evidence of suffering, of the impacts of our failure, so we move to punishment as a desperate solution, abandoning our community values as we go.