Just three blocks from City Hall — that gorgeous, gold-plated building where politicians are deciding how to spend more than $10 billion next fiscal year — sits a shooting gallery in broad daylight.

Every day, dozens of injection drug users wearing tattered clothes and dazed expressions slump against the walls of the huge PG&E Mission Substation at Eighth and Mission streets, spreading their garbage, dirty needles and other drug paraphernalia around them. 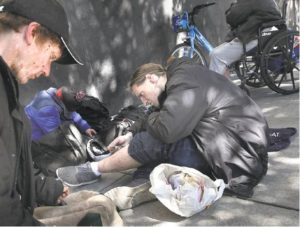 Liz Hafalia / The Chronicle
Drug use persists at Mission and Eighth streets despite neighbors’ complaints and authorities’ efforts. Supervisors declined to support a proposal that would require addicts to engage in support services.

There’s a proposal that could help address the deeper issues lingering on that corner. And so, of course, our dithering supervisors declined to support it because they hadn’t talked about it enough. Because what San Francisco needs right now is even more talk and even less action.

At issue is state Sen. Scott Wiener’s proposal to give counties more control over conservatorship programs for the mentally ill.

Currently, state law says that counties can hospitalize people for 72 hours against their will only if they pose a danger to themselves or somebody else or are gravely disabled, such as not being able to feed themselves. The county can go before a judge to ask for a 14-day extension and repeat the process every 30 days.

Wiener’s proposal is pretty mild. He wants to give counties more control over their own conservatorship rules, wants more supportive housing units attached to the conservatorship slots, and wants severe drug addiction to be a factor in qualifying for conservatorship. A person would have to be chronically homeless, mentally ill and severely drug addicted to be conserved under his proposal.

That means some of those sad souls at Eighth and Mission could be required to engage in the services they so desperately need but are too out-of-their-minds to accept.

Two weeks ago, supervisors took up a resolution from board President London Breed supporting Wiener’s proposal. Because it was fast-tracked, coming to the board without a committee hearing, it needed eight votes to pass. Breed continued it to Tuesday because her colleagues wanted more time to review it.

On Tuesday, those supervisors said they still didn’t know enough about it and voted it down. Supervisors Aaron Peskin, Norman Yee, Sandra Lee Fewer, Hillary Ronen and Jane Kim declined to support it.

Even though Barbara Garcia, the director of the Department of Public Health, and Jeff Kositsky, the director of the Department of Homelessness and Supportive Housing, support it. And even though if it passes in Sacramento, these same politicians will get the chance to talk about it a whole lot more before deciding whether to join the optional program and what they want a San Francisco conservatorship program to look like.

Surely the moderates coalescing behind Breed and the progressives voting against her had nothing to do with the June 5 mayor’s race in which Breed and Kim are front-runners, right? Ahem.

So basically everybody talked about whether they’d talked enough, voted along political lines and accomplished nothing.

Just another day at City Hall.

Wiener’s legislation continues in Sacramento regardless, and he is hopeful it will reach the governor’s desk by the end of August. He said he is disappointed the San Francisco Board of Supervisors, unlike the Los Angeles City Council, failed to support his bill, a curious omission as a senator from San Francisco fights for a law in the state capital without the support of his own city’s supervisors.

“It’s always, ‘No, no, no, can’t try anything new, can’t do anything differently, gnash our teeth about these problems,’ ” Wiener said. “And just revert back to the same tired, failed approaches.”

Kim said she voted against it because, “It doesn’t have as much detail as I would like, and it is a very heavy-handed tool where you are highly restricting a person’s civil liberties. … I felt like it deserved its own conversation.”

Her district includes that corner at Eighth and Mission, the notoriously seedy Civic Center BART Station and many other public drug dens. So what would help? More treatment beds, which she thinks drug users will eventually accept with enough contact from the Homeless Outreach Team. She was irked that a 75-bed medical respite center in her district took more than two years to open after she secured the money for it.

“It was very frustrating to me,” she said of the delay. Yeah, we can relate.

OK, let’s open more treatment beds. And support conservatorship changes. It doesn’t have to be one or the other, but it does need to happen quickly.

Ronen, to her credit, has been on a fact-finding mission to learn about mental illness and the conservatorship program. She said several experts have told her the real problem is there is not enough transitional housing for those released from the psych ward at S.F. General Hospital, meaning patients are kept at the hospital far too long or wind up back on the streets.

She also lamented that more than 700 affordable housing units planned for her district have yet to be built.

“Why does it take forever?” she asked. Because everything at City Hall takes forever. OK, more treatment beds, more transitional housing, quicker building of affordable housing, plus changes to the conservatorship rules.

Fewer said she wanted to understand the nuances of Wiener’s proposal better and that she’s “not against it.” Asked whether she’s OK with all the injection drug use, homelessness and mental illness on our streets, Fewer said, “How can anyone be? It’s heartbreaking. As a native San Franciscan, it’s worse than I’ve ever seen it.”

Fewer said she and her husband, a retired undercover narcotics officer with the San Francisco Police Department, recently saw a man blatantly selling what looked like 100 rocks of crack cocaine in broad daylight at Golden Gate Avenue and Larkin Street in the Tenderloin. She said they just kept walking and didn’t call police. Yes, this city has become so paralyzed that a supervisor and her husband, an expert in narcotics, thought there was nothing they could do.

“What has happened to our narcotics enforcement? We are not an open pharmacy here. We’ve lost our way a little here,” Fewer said. “I want to really talk about this.”

P.S. If our city leaders need any more of a nudge, look at these sobering facts. Kositsky, who was charged by the late Mayor Ed Lee with getting 1,000 people off the streets over the winter, said that his team has reached 456 people.

But that included 307 people served by the expanded winter shelter program, and if they slept in a shelter bed for seven nights, they were counted, even if they’re now back on the streets. Others were placed in Navigation Center beds, medical respite beds or housing.

Kositsky said that he’d give his team an A in terms of long-range planning and a C-plus for day-to-day work.

“Things aren’t getting better,” he said. “They’re taking longer than I wish they would.”

A homeless count is conducted every two years in San Francisco, and the last one was performed in 2017. Kositsky said he expects “a significant improvement in homelessness” by the 2023 count.

I don’t know anybody — most of all the homeless and mentally ill themselves — who can wait that long.