Now is the time to inform Bay Area Media about solutions to homelessness, including family homelessness:

A Plan to Flood San Francisco With News on Homelessness

A homeless man’s tent on Florida Street last week in San Francisco. Journalists are banding together in an attempt to spur the city to take action on the homeless crisis. CreditJim Wilson/The New York Times

SAN FRANCISCO — As the editor in chief of The San Francisco Chronicle, Audrey Cooper has overseen countless stories on homelessness. But the issue became personal three years ago when she was pushing her 6-month-old child in a stroller through the city’s business district. A homeless couple in a tent on the sidewalk were having sex, tent flaps open, as their pit bull stood guard.

Ms. Cooper expressed her outrage loudly and in colorful language.

“I probably shouldn’t have started yelling at them,” she said in an interview in her fishbowl office in the heart of the Chronicle’s newsroom. “They let their dog loose.”

San Francisco residents have over decades become inured to encounters with the city’s homeless population, the clumps of humanity sleeping on sidewalks under coats and makeshift blankets, or drug addicts shooting up in full view of pedestrians. There are also the tension-filled but common scenes of mentally ill men and women stumbling down streets, arguing with imaginary enemies or harassing passers-by.

One particularly vocal group of residents, San Francisco’s journalists, say they feel a sense of urgency in addressing the problem. They are banding together in an exasperated, but as yet vaguely defined, attempt to spur the city into action.

Next month, media organizations in the Bay Area are planning to put aside their rivalries and competitive instincts for a day of coordinated coverage on the homeless crisis in the city. The Chronicle, which is leading the effort, is dispensing with traditional news article formats and will put forward possible solutions to the seemingly intractable plight of around 6,000 people without shelter.

Representatives from Bay Area television and radio stations, The Chronicle, The San Francisco Examiner, Mother Jones and online publications, among others, met last month to figure out a plan to share resources and content. They agreed to publish their reports on homelessness on June 29.

“We are all frustrated,” said Jon Steinberg, the editor in chief of San Francisco magazine, which is also taking part. “We are all fed up. We feel there is not enough movement and accountability on the issue.”

“We want the full force of the Fourth Estate to bear down on this problem,” he added.

Thirty news organizations have confirmed their participation. KQED, a public television and radio station, is also taking a lead role in the campaign.

The premise of the effort is to create a “wave” of coverage that will force politicians to come up with solutions, Ms. Cooper said.

“You will not be able to log onto Facebook, turn on the radio, watch TV, read a newspaper, log onto Twitter without seeing a story about the causes and solutions to homelessness,” she said.

At a time of tight budgets, collaboration has become increasingly common in the news business. This year’s Pulitzer Prize for investigative journalismwas won by a combined team from The Tampa Bay Times and The Sarasota Herald-Tribune in Florida. Still, the San Francisco collaboration stands out for the number of organizations involved and, in the case of The Chronicle, the emphasis on proposing solutions.

Ms. Cooper said The Chronicle will run a week of coverage, including four articles that she described as something akin to a science project: putting forth a hypothesized solution and investigating it. The first proposal is that the city build a mental health center large enough to treat the mentally ill on the streets. The article will explore the cost and the feasibility of institutionalizing people.

“We need to be a hell of a lot more creative about how we solve this problem,” Ms. Cooper said. “And we are probably going to have to break some dishes to do it.” The paper’s articles and photographs will be offered free to all participants. The paper will also run a front-page editorial with its conclusions on what solutions should be pursued.

Advocacy is a longstanding taboo in American journalism, making reporters and editors wary of discussing solutions to the problems they highlight in their coverage. One rationale for this is that journalists who advocate causes might be selective in their reporting or biased in their coverage.

In a city known for its liberal traditions, the question of whether San Francisco’s journalists are crossing into activism has not come up, at least not in the initial meeting of news organizations last month.

“It was sort of shocking that there was no dissension,” said Holly Kernan, the executive editor for news at KQED, the public broadcaster that hosted the meeting. “On the contrary, the conversation was, ‘Let’s do way more.’”

Ms. Kernan said her station plans “blanket” coverage on June 29, but will not propose solutions. “I see what we are doing as pure journalism,” Ms. Kernan said. 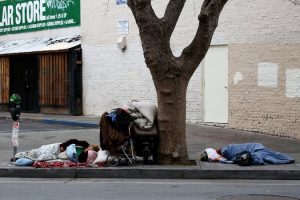 Aaron Pero, news director of KRON-TV, a Bay Area television news station, said he planned to have a report on homelessness each day for a week, possibly profiles of homeless people.

“I wasn’t going to try to figure out how to solve the homeless problem,” Mr. Pero said. “My vision was to send a number of reporters out and to find a profile that we could do every single day.”

Mr. Pero said it was “really awesome that all these media outlets are coming together.”

“I don’t think it’s been done anywhere else,” he added.

Only one local outlet, KCBS, a news radio station, declined to participate.

“It’s not because of any lack of interest in the homeless or any perception that the story is unimportant to our listeners,” Jack Swanson, the director of news and programming at KCBS, said in an email. “Like many media outlets in the Bay Area we cover the homeless situation in our communities and will continue to cover it, on a regular basis.”

(A New York Times reporter also attended the meeting. While The Times is not participating in the coordinated coverage, it has and will continue to cover homelessness as a major issue in the city.)

Proponents of solutions-oriented journalism are applauding the initiative.

Andrew Donohue, a senior editor at the Center for Investigative Reporting, a nonprofit organization that partners with other media on reporting projects, said the single-minded, muckraking focus of some journalism has made the public more cynical. “There’s outrage fatigue,” Mr. Donohue said. “You can very easily leave people feeling helpless, which can then lead to being disengaged.”

Courtney Martin, a founder of the Solutions Journalism Network, a nonprofit organization that advocates journalism that covers solutions to social problems, said she was thrilled to hear of the San Francisco project.

“This is the kind of thing that is music to our ears,” Ms. Martin said. “We have this bias in the media to think that our only job is the watchdog role.”

A journalist’s job, she said, “is not to pick a winner.”

“Your job is to investigate solutions,” she said. “People want to read about how to fix broken systems.”