According to Stephen J. Nesbitt and Steph Chambers of the Pittsburgh Post-Gazette, Tumpane saw a woman climbing over a railing above the Allegheny River and went over and “locked both arms around her back.” 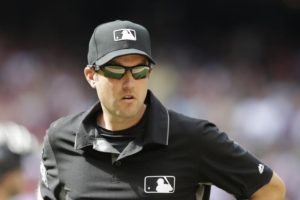 “At times, she dangled both feet off the bridge’s edge, putting her full weight in his arms,” Nesbitt and Chambers wrote, but he prevented her from falling to the river until police and an ambulance arrived and helped lift her back over the railing.

Tumpane had an emotional conversation with the woman, making sure to express how much he cared for her despite her protestations to the contrary.

A police spokeswoman said the woman was taken to the hospital and suffered non-life-threatening injuries.

It was a chance encounter for the umpire before he headed to PNC Park for Wednesday’s contest between the Pittsburgh Pirates and Tampa Bay Rays, but he performed a heroic act and likely saved the woman’s life.

“You never know what somebody’s day looks like,” he said, per Nesbitt and Chambers. “It’s a nice day, everyone’s out for a walk, and somebody’s not having the same day you’re having. I was just glad to help.”