The jury deadlocked on charges the guards assaulted another mentally ill inmate earlier that evening. They also could not reach consensus on whether one of the guards had assaulted the same inmate a month earlier. 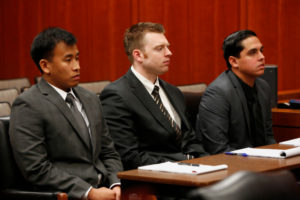 The panel’s decision followed a two-month trial in which attorneys clashed over how 31-year-old inmate Michael Tyree died in his single cell at Main Jail South on Aug. 26, 2015. The outcome is expected to have major consequences for what is perceived as acceptable when it comes to the use of force against inmates.

The guards — Jereh Lubrin, 30, and Matthew Farris and Rafael Rodriguez, 28 — stood emotionless as the verdicts were read in Santa Clara County Superior Court. They will be sentenced to 15 years to life in prison on the second-degree murder convictions. They had been free on $1.5 million bail each and on paid leave but were handcuffed and taken into custody after the verdicts as relatives wept. Sentencing is scheduled for Sept. 1

“Unfortunately, we can’t bring Michael Tyree back, but we will hold these people accountable,” District Attorney Jeff Rosen said after the verdict was read. “Everyone is entitled to be treated like a human being, whether they are a banker, law enforcement officer or inmate.”

Tyree’s death sparked outrage and a close review of the jails run by the Sheriff’s Office, including by a special civilian-led commission. The county has implemented some reforms, including installing cameras in most locations in the jail, though not in the unit where an inmate was beaten to death May 16 by another prisoner. But 19 months after Tyree died, officials are still studying whether to appoint an independent inspector general to oversee the jails. In September, the county settled a lawsuit filed by Tyree’s family for $3.6 million.

Sheriff Laurie Smith, who oversees the jails, said after the verdicts that she stands by her 1,400 deputies “who perform their admirable duties for residents with integrity and compassion” and that “we will not be defined by the actions of these three individuals.”

“This tragic incident has served as a catalyst in our ongoing progressive efforts within our custody bureau,” Smith said.

But former Judge LaDoris Cordell, who headed a county blue-ribbon commission to evaluate the jails after Tyree was killed, continued to call for new leadership of the jails. Two other Santa Clara County jail guards, Phillip Abecendario and Tuan Le, face charges of assaulting another inmate about a month before Tyree died. If convicted, they would face a maximum of three years in county jail.

“The environment that existed in the Main Jail was ripe for something like this to happen,” Cordell said. “This verdict signals to everyone that change must happen and it must happen soon.”

Amy Le, president of the union that represents the county’s correctional deputies, issued a statement the day after the verdict stressing the need to reduce the practice of warehousing the mentally ill in jails.

“We are sad with the jury’s verdict, but we respect it,” she said in the statement issued by the Santa Clara County Correctional Peace Officers Association. “We must continue to work together for long-term solutions for the treatment of the mentally ill, including the creation of specialized facilities to meet their needs…(and) reject the false narrative that officers and advocates for inmates cannot work cooperatively to improve correctional facilities.”

During the trial, prosecutor Matt Braker contended that the correctional deputies viciously beat Tyree, who was bipolar, as punishment for mouthing off to a jail nurse earlier in the evening. Under the second-degree murder theory the District Attorney’s Office pursued, Braker didn’t have to prove the guards intended to kill Tyree, only that his death was caused by their dangerous conduct and reckless disregard for human life.

Braker argued that the boot-clad guards stomped on Tyree at least once and struck him repeatedly, including with a small blunt weapon known as a Yawara stick. As the deputies left his cell, Lubrin switched off the light, which a former inmate testified is unusual because that would give a prisoner the chance to assault them from behind in the dark. The implication was the guards may have known Tyree was unconscious or too injured to pop up from behind them. 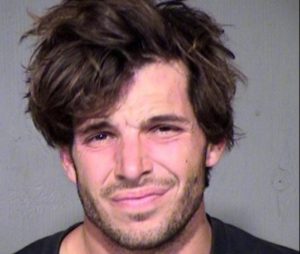 Tyree was in jail awaiting a bed in a residential treatment center for the mentally ill after serving time on a minor drug charge,

The guards also were charged with assaulting another mentally ill inmate, Juan Villa, before Tyree, but the jury deadlocked 10-2 on that charge. It was unclear whether the split favored conviction or acquittal. Lubrin also faced the separate, additional charge of assault under color of authority involving Villa a month before Tyree died, but the jury deadlocked 6-6 on that charge. The District Attorney’s Office is weighing whether to retry the assault charges.

Defense attorneys Judith Odbert, Bill Rapoport and Matt Pavone argued that the bipolar inmate sustained most of the injuries on the front, back and sides of his body — including a ruptured spleen and lacerated liver — from falling 3 feet or so off the sink in his cell, either accidentally or intentionally. Overly aggressive efforts to revive him also were a factor, they said.

Medical experts for the defense concurred, testifying that the wound on Tyree’s spleen matched the cell sink’s edge. Cell wall writings and comments overheard by other inmates indicate Tyree was suicidal, the defense argued.

The defense attacked the credibility of inmates who testified they heard Tyree “screaming for his life” and begging the guards to “stop, please stop.”

But in his closing argument, Braker reminded the jury of texts, sent almost exclusively by correctional officer Matthew Farris, that refer to inmates being “twisted up,” “sprayed,” “kicked,” “locked down,” “slapped” and  “beaten the (expletive) down.” Braker contended the texts express humor and enjoyment at pain or discomfort experienced by the inmates, particularly mentally ill prisoners.

Among the most incriminating texts was a message Lubrin sent backing up Villa’s story about how he had ground the inmate’s face in his feces.

But two deputies who work with the defendants and who were involved in some of the text exchanges testified for the defense that the sadistic-sounding messages were merely “sarcasm” and “bantering.”

The guards did not acknowledge using any force on Tyree at all. But Braker noted that Rodriguez did a chilling web search on his phone the day after Tyree’s death.

“Can you die if someone punches you in the armpit?”