On Monday, city officials plan to announce a major step toward rescuing those severely mentally ill homeless people from their afflictions — the opening this month of 54 new lockdown psychiatric beds at St. Mary’s Medical Center. 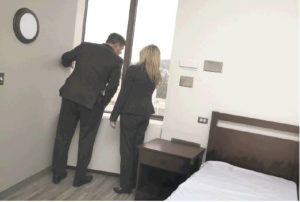 This will more than double the current number of beds in the city for mental patients who have been ordered by a judge into conservatorship, meaning they must involuntarily accept round-the-clock treatment because they are too ill to live on their own.

Mental health policy experts and city leaders including the late Mayor Ed Lee and current Mayor Mark Farrell have been pushing for the expansion for years. The new facility, called the San Francisco Healing Center, will be for anyone under conservator-ship. Though city officials promise this won’t bring a sudden roundup of mentally ill homeless people, a big goal of the center will be to help them.

The most obvious candidates for cops, street counselors and others who deal with the most chronic homeless people will be the city’s 40 or so “frequent fliers” — those who often use medical services and still wind up back on the street with serious behavioral health problems. Not all are the type who scream at telephone poles. Some just suffer in silence, hiding or rocking in place. Either way, their plight — and sight — is heartbreaking, and as Farrell walked through the soon-to-be opened center last week, he said the new beds could be transformative.

“This has the promise of making a massive difference on our streets,” Farrell said, standing in the middle of the Healing Center. “This is addressing one of our biggest issues in the city, and getting the most visible homeless people on our streets into a healthier place like this will be better for everyone.”

Farrell and other city leaders are supporting a bill by state Sen. Scott Wiener, D-San Francisco, to make it easier to move the most intransigent cases of mentally ill homeless people into conservatorship. If the bill is successful, the new center will be a key tool.

The city’s Department of Public Health will oversee the center, and as department chief Barbara Garcia — who pushed hard for its creation along with the late Mayor Lee — walked alongside Farrell, delight lit up her face

“This will save lives,” she said, peering at one of the 54 residential rooms, a fresh-smelling studio with bed, dresser, night table, full bathroom and a window to the outside. “Doubling the capacity to help people with this type of need? It’s a huge deal, a really huge deal.”

The rooms, and the offices and meeting and lounging spaces that go with them, will take up the fifth floor of St. Mary’s. The first patients are scheduled to arrive next Monday.

The beds will be similar to the 47 now operated at the Mental Health Rehabilitation Center at S.F. General Hospital. Patients are initially ordered under conservatorship for up to a year, but the average stay is six to nine months, with patients leaving for more independent living situations after they’ve been helped. The Healing Center will try for the same stay lengths.

“This is not a jail,” Garcia said. “Our goal is not to institutionalize people, but to get them ready to be housed as independently as possible.” With that in mind, the city has hired Crestwood Behavioral Health to run the center.

Crestwood, the biggest provider of residential mental health treatment in California, plans to provide the patients with a wraparound approach of therapy, job training and life-skills instruction that can range from showing people how to pay bills to helping them dress properly.

Everything about the center, which is still getting its final touches of paint and furniture, is meant to be soothing — from huge windows bringing in light to muted gray colors and comfy couches. It’s an involuntary ward, but there are no locks on the room doors. A game room will offer pingpong tables and board games.

There are unexpected little touches, too: All along the hallways are squares dotted with small tiles and large video screens showing images of fish tanks.

“We have actually found that looking at fish tanks reduces anxiety,” said Patricia Blum, a Crestwood executive vice president. “And the tiles — if you need to, say, express rage, your brain chemistry changes when you push on them. It’s calming.”

Those are just small tools in the larger goal of healing people enough to ease them into greater independence, and perhaps employment, after they leave, Blum said.

“Most people have to go through many steps after they leave a place like this to be ready for a job,” she said. “Having a diagnosis of being bipolar or having been conserved can be a barrier. But we can help with that in many ways.”

The center’s $5 million annual cost will be carried by the Department of Public Health, but Garcia said she hopes federal and state funding can help in the future. Either way, the treatment saves money in the long run.

he daily tab for each center patient will be $450. In contrast, a daily stay in an intensive-care hospital bed, which is where patients can wind up if there is no lock-down bed available, costs $2,000.

Most tellingly, simply leaving a “frequent flier” on the streets costs about $150,000 a year in emergency room visits, police calls and other services, according to city studies. And that can go on for years.

The Healing Center is designed to drastically bring down the cost to society by helping patients carry more of their own weight — a happy prospect not just for the patients, but also for those who no longer have to rush around treating them in the gutter.