Their new nonprofit, Shelby’s SafeSpace, plans to open a center in downtown Menlo Park by August. It will be a place where children and young adults can freely talk about issues they are dealing with, anything from relationships to bullying to sleeping disorders. 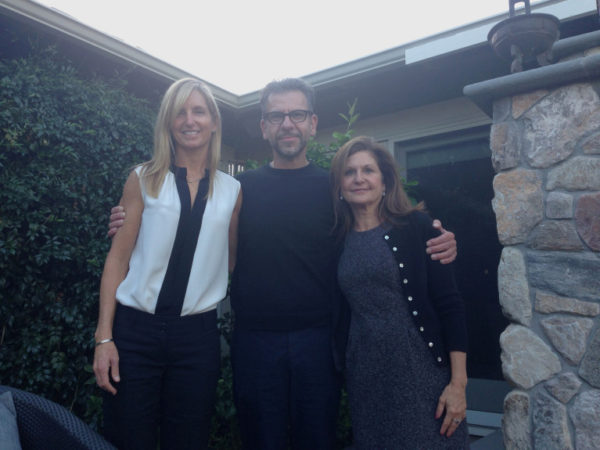 Stacy Drazan, from left, Chris Tanti and Susan Bird are part of the team planning to launch SafeSpace, a center for teens to discuss and get help with mental health issues, in Menlo Park by next August. The photo, taken Nov. 1, 2016, was taken in the backyard of Bird’s Menlo Park home. (Kevin Kelly / Daily News)

Tanti said Headspace has helped to normalize mental health issues in Australia since launching in 2006, as well as lower the suicide rate, which is four times higher among ages 12 to 25 than other groups.

“To get (mental health) care here or anywhere really, you’ve got to be really sick,” Tanti said. “No one would do that in any other area of medicine, but in psychiatry, you’ve got to be acutely unwell before anybody gives you attention.”

By then, it could be too late.

Drazan lost a 17-year-old daughter named Shelby to depression two years ago. That sparked the SafeSpace idea. Drazan, who became aware of her daughter’s depression during her junior year of high school but later learned it dated back as far as seventh grade, said if SafeSpace existed then Shelby might still be alive.

“We only knew about (the depression) a year before and by the time we even found out, she was already in crisis,” said Drazan, who described Shelby as smart, outgoing and empathetic.

A close friend of Shelby convinced her to open up to her mother.

SafeSpace will be geared to people 12 to 25 years old.

“Adolescence is a complex period psychologically, emotionally, biologically,” Tanti said. “Think about your first relationship breakup. It’s significant because you’re asking yourself questions about yourself and what it means. … A lot of the things that happen during adolescence are the first time you have these experiences and you have no road map for any of it.

“There’s a lot going on and then, on top of that, the majority of mental health problems begin during that age range. … In a sense, it’s a high-risk category. If they’re attended to early, there are not a whole lot of other problems that can emerge later.”

If the problems aren’t dealt with, they don’t go away, he said, and can eventually lead to secondary problems such as withdrawing from social groups, dropping out of school and getting kicked out of home.

“The prison system is full of people who have a primary mental problem that has never been detected,” he said. “What we’re trying to do is, we’re trying to change the course of that illness, if you like, through intervening early and potentially preventing that problem. This is what it’s all about.”

SafeSpace intends to work with as many high schools as possible in San Mateo County and is in talks with officials at Menlo-Atherton High School, Sacred Heart Prep, Menlo School and the San Mateo Union High School District. The aim is to have a SafeSpace youth advisory group that includes at least two student representatives from each school who will be taught how to lead their own mental health discussion groups at their schools.

Youths will be involved in every aspect of SafeSpace.

They will help craft policies, design the center, and even be part of a panel interviewing prospective clinicians to work at the center. The goal is to make SafeSpace as comfortable for the youths as possible, including making sure they are matched up with the right counselor.

“If you come to a SafeSpace center and the person you are seeing … just doesn’t feel right, you can see someone else,” Tanti said, adding that if youths stop coming for services, staff will follow up to find out why. “The customer service response in mental health has just never been there before.”

Bird said no one who seeks help will be turned away, even if they don’t have health insurance or can’t afford the co-pay amount.

Bird added that once the program is synced up with high schools, SafeSpace will push into middle schools.

SafeSpace is hoping to raise $3 million by the end of the year to help it purchase a Menlo Park site, likely near the Caltrain station, and to pay for clinicians and begin planning for future locations.

It has hired Tom Tarshis, executive director of Bay Area Children’s Association, to be its clinical director. The Children’s Association offices in San Jose and Oakland will eventually become SafeSpace locations, through an agreement SafeSpace inked Oct. 24 with the mental health agency that employs evidence-based clinicians and PrairieCare, a Minnesota-based psychiatric health care group.

“BACA is eager to work with SafeSpace and PrairieCare to build upon what we’ve already accomplished here in the Bay Area,” Tarsis said in a news release.