Man Who Survived Suicide Jump From Golden Gate Bridge Shares His Story to Help Others: 'The Moment I Hit Freefall Was an Instant Regret'. 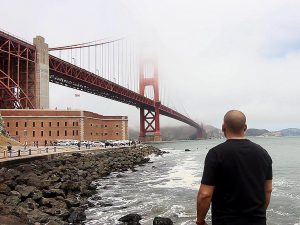 Kevin Hines looks upon the Golden Gate Bridge in San Francisco, Calif. – where he survived a suicide jump 15 years ago.  Courtesy Kevin Hines.

The millisecond after Kevin Hines jumped from the Golden Gate Bridge to the bay below, he felt instant regret.

“I said to myself, ‘What have I done, I don’t want to die, God please save me,’ ” recalls Hines, 34, of his suicide jump in September 2000. “The moment I hit freefall was an instant regret – I recognized that I made the greatest mistake in my life and I thought it was too late.”

He miraculously survived. Hines, who suffers from bipolar disorder and says he stays “alive and well” with a combination of therapy, medication, exercise and other means, now travels the world to share his story.

He also wrote about his suicide attempt and recovery in his moving memoir, Cracked, Not Broken: Surviving and Thriving After a Suicide Attempt.

On Monday night, Hines spoke at the University of Pennsylvania, where 10 students have committed suicide in the last three years. The most recent death was last Monday, of Wharton School of Business junior Ao “Olivia” Kong.

“My goal is to try to instill hope in one individual,” Hines tells PEOPLE. “So that one individual says, ‘Maybe I can stay here, maybe there are tools to fight this.’ ”

Over the years, Hines has helped save numerous lives, including people he’s met one-on-one.

Melinda Wallace is one of those people.

During her third suicide attempt in December 2012, Wallace reached out to Hines, asking him to let her husband know it wasn’t his fault.

“Kevin knew what I was up to,” says Wallace, who also shares her story in a documentary Hines is making called Suicide: The Ripple Effect.

Hines called the police and got her family involved. “I appreciate it,” she tells PEOPLE. “But I was a little bit mad at the time. He helped save my life that night. And he continues to when I have a difficult day and I need to share this burden with someone who can handle it.”

Hines knows how lucky he is to have survived his suicide attempt. Since it was erected in 1937, more than 1,700 people have jumped off the Golden Gate Bridge in San Francisco, Calif., and just 25 are known to have survived, according to Robert Olson of The Centre for Suicide Prevention in Calgary, Canada. Olson notes that the Golden Gate is a particularly lethal means of killing oneself: While the average survival rate of bridge suicide attempts is 15 percent, those off the Golden Gate is just 4 percent.

On Sept. 25, 2000, Hines, then 19, took a bus to the bridge. He paced the pedestrian walkway in tears. He says he had voices in his head telling him to die, but he also fervently wished someone would ask him what was wrong.

“I said to myself, ‘If one person comes up to me and says, ‘Are you okay? Is something wrong? Can I help you?’ I was going to tell them my whole life story and they were going to make me safe.”

“It’s not very logical,” he adds. “The nature of a suicidal person is to be irrational.”

But his desire to die overwhelmed him.

“The voices in my head were so great, so loud, that you couldn’t fathom unless you were inside my head, screaming, ‘You must die, jump now,’ ” he recalls. “It was the most horrid, emotional, turmoil I’ve ever experienced – and I could not control myself.”

As Hines landed in the water after the 220-foot freefall, he shattered and crushed three vertebrae.

“When I resurfaced and I was trying to stay afloat, I was thinking, ‘I am going to drown.’ As I was bobbing up and down in the water, I was saying, ‘I don’t want to die, God I made a mistake,’ ” he recalls.

Hines says a sea lion kept pushing him above the water’s surface until the Coast Guard rescued him. After he recovered from surgery, Hines entered into psychiatric care at St. Francis Hospital in San Francisco – the first of seven in-patient stays to deal with his depression, paranoia and hallucinations.

During that first stay, Hines met a priest who encouraged him to share his story.

“[It] is the thing that changed my life forever,” he says of the meeting.

About seven months after the jump, a hesitant Hines gave his first talk to 120 seventh and eighth graders. “I was freaking out,” he says. “I was a mess.”

About two weeks later, the children sent him letters – the letters had been screened – and several kids received the help they needed to deal with their painful issues.

“A story helped them decide to be honest about their pain,” says Hines. “When that happened, I said to my father, ‘Dad, we have to do this, any way, anywhere we can.’ This is how it all started.”

Today, Hines lives in Atlanta with his wife of 10 years, Margaret, whom he says plays a big role in keeping him mentally stable. The couple met 12 years ago during Hines’ third involuntary stay in a psychiatric hospital.

“She was coming to visit one of her family members who was having a hard time,” Hines says. “When I met her, I said to myself when I looked into her eyes, ‘I am going to marry her.’ ”

Hines admits that he still struggles with paranoia and suicidal thoughts, but he hopes that by telling his story, he will inspire others to open up and realize, ‘I can help myself today,’ ” he says.

He urges anyone who sees someone suffering and in pain – like he was that day on the Golden Gate Bridge – or whom they suspect may be having suicidal thoughts, to reach out.

This suicidal person “needs to hear what I needed to hear,” he says. “That we care about you, your life does matter and that all we want is for you to stay,” he says. “If someone had looked at me on that bridge or that bus and said that to me, I would have begged for help.”

Hines urges anyone struggling with suicidal thoughts to call the suicide prevention hotline at 800-273-TALK (8255).