Kaiser Permanente patients assembled outside the health care provider’s Oakland headquarters Wednesday, calling for shorter wait times for mental health appointments and demanding a meeting with the CEO. The event was attended by officials of the National Union of Healthcare Workers, which represents some Kaiser employees and is in contract negotiations with the company. The union mounted a five-day strike in December. Among those who spoke were Santa Rosa’s Seong and David Brown, whose daughter Elizabeth committed suicide last year at age 19. Elizabeth was a “dream child,” Seong Brown said. With a black belt in karate, she taught self-defense classes on the weekends and aspired to be a journalist. But she struggled with her mental health, and the Browns faced week-long waits for appointments for Elizabeth and spent tens of thousands of dollars out of pocket to get her care. Kaiser doesn’t have enough clinicians to see patients in a timely manner, and there’s too much of a focus on medication and group therapy, David Brown said. The Browns and several other individuals, including Sonoma County Supervisor Shirlee Zane, sent a letter to Kaiser CEO Bernard Tyson April 3 requesting a meeting to discuss their experiences with the health care provider’s mental health services. “We believe that if you take the time to listen and understand how Kaiser failed us and our families, you will be better able to make sure other families don’t have to suffer the pain we’ve endured,” the letter read. “None of us wants our suffering to be in vain.” 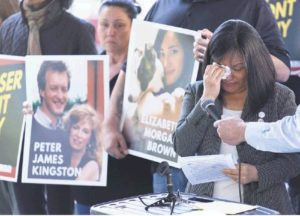 Kaiser spokesman John Nelson criticized the union for its involvement in the event.

“We find it unconscionable that (union) leadership would misdirect the grief and sorrow around suicide and capitalize on personal tragedy as leverage during contract bargaining,” Nelson said in the statement. “We are reaching out by phone to the families who signed the letter to Kaiser Permanente, and are offering to meet with them in person.”

Kaiser said it had increased the number of therapists it employs by 30 percent since 2015, including more than 500 new therapists in California, and invested $175 million to expand its mental health care offices.

The letter requested a response by April 12. Tyson called the Browns on Tuesday and said he would meet with them and followed up by email Wednesday morning, Seong Brown said, but there has not been a date set for a meeting. She was frustrated that Tyson’s response only came after the rally was organized and press releases were sent out.

Kaiser is the country’s largest integrated health system. It has about 12 million patients in the U.S., with about 4 million of them in Northern California. 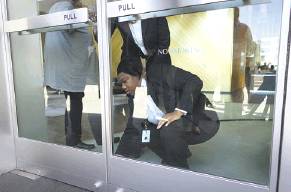 Kaiser security guards secure the door from protesters at the Oakland headquarters.

Its mental health care has received criticism in the past. It was fined $4 million in 2013 by the California Department of 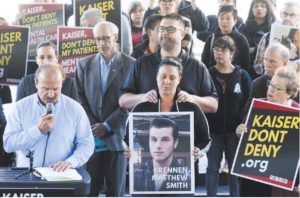 James Tensuan / Special to The Chronicle
Protesters at Kaiser headquarters in Oakland talk about their experiences with the provider’s mental health services.

Managed Health Care for not giving patients adequate access to mental health treatment. The agency also criticized Kaiser last year for its delays in behavioral health treatment, but the department did not fine Kaiser again.

Kaiser has taken steps to give patients more options for mental health care, including a new telepsychiatry service, according to Dr. Sameer Awsare, associate executive director for regional mental health.

How to get help:  For anyone in crisis or concerned about a loved one, help is available by calling the National Suicide Prevention Lifeline at 800-273-9255 or by texting “HOME” to the crisis Text Line at 741741.  All help lines offer 24-hour, confidential support.