It’s dangerous and damaging to assume that violence is a symptom of this disease.

The Opinion Pages | Op-Ed Contributor
Sarah Palin, This Is What PTSD Is Really Like 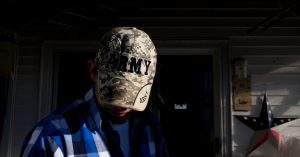 AS a veteran, I want politicians and public figures to try and understand what military deployment is like, and to relate to my experiences. But I’m not sure I want Sarah Palin weighing in.

On Wednesday, a day after endorsing Donald J. Trump for president, the former governor of Alaska and vice-presidential candidate attended a Trump rally in Oklahoma. Another member of her family, her son Track, who served in Iraq, had also made news during the week; he was arrested in a domestic violence case.

At the rally, Mrs. Palin said, “When my own son is going through what he goes though coming back, I can certainly relate to other families who feel these ramifications of PTSD,” and, she continued, “it makes me realize more than ever it is now or never for the sake of America’s finest that we have that commander in chief that will respect them and honor them.”

Mrs. Palin seemed to suggest that the policies of President Obama had somehow worsened her son’s condition. And by explaining away domestic violence as the “ramifications of PTSD,” she intimated that her son’s actions are logical consequences of what he experienced while deployed. This is, of course, a disingenuous argument from a career opportunist. However, in a roundabout way, Mrs. Palin reignited a valuable discussion of combat and its psychological effects. Her portrayal of her son’s condition seems aligned with enduring renditions of veterans as ticking time bombs, as damaged beings primed to harm.

I can’t offer any grandiose pronouncements on the topic, and I’m not an expert on the levels of domestic violence among veterans. But I can describe my own experience as someone with post-traumatic stress disorder.

Before my deployment to Afghanistan in early 2009, I was stationed in Alaska. My fondest memories of that state involve volunteering at a bicycle co-op the summer before heading overseas. When my tour ended, it took about 10 days to get back to Alaska from Afghanistan. During the long periods of waiting, I daydreamed about what I’d do upon arriving home. The co-op was high on my list.

Within a week of my return in March 2010, I visited the co-op at its new, unfamiliar building. I found myself in a hot, loud and crowded room full of aloof young strangers. In that moment, I felt a sudden burst of panic, something completely unexpected. I felt as if I was going to die. I had to leave the room, to return to the safety of my truck parked outside in the snow. Something was very wrong; something about me was clearly defective.

This was the first indication that life after combat wouldn’t be the idyll I had envisioned during my 13 months overseas. And there would be plenty more: When I was confronted with a crisis, it began to feel as if someone had placed a magnifying glass over my normal emotional responses. At times I’d be hyper-alert, at others so brain-fogged that no amount of stimulants could enliven me, and no amount of alcohol could relax me. However, for three years I refused to seek help. I did not want it to affect my military career.

What those three years of denial entailed are scenes that I would much rather forget. Later, I realized that many of my friends had experienced similar moments: extreme reactions to emotional stimuli, hours of fear, weeks of hyper-vigilance. The common thread was not a tendency toward violence but rather toward self-hate. There were no flashbacks of combat. There was instead a sinking feeling that I’d always be a downer, always on guard, never able to relax. It was the fear of being permanently broken.

Every weekday, get thought-provoking commentary from Op-Ed columnists, The Times editorial board and contributing writers from around the world.

Because there is a stigma attached to mental health issues, there is a personal and professional risk attached with admitting an unseen ailment. I have the benefit of being a veteran, but I still worry about future graduate school applications or academic job searches. I worry about my own tenuous employment as an adjunct English lecturer. I also know that I’ve managed to improve my symptoms greatly by seeking counseling, avoiding destructive behaviors and writing about my experiences. I can function in society because I was able to seek care, and I want to make that care more accessible to people who need it.

That process begins by speaking frankly. Facing up to destructive or abusive behavior comes next, along with the assertion that we are responsible for our actions, no matter what burdens we carry. Post-traumatic stress is no excuse for violence or abuse, nor should it be considered a default association. I’d like to hope that, beneath the bluster and the political talking points, Sarah Palin understands this. I hope even more that her son seeks care and finds peace.

Nate Bethea served as a United States Army infantry officer from 2007 to 2014. He is a teacher with Voices From War, a creative-writing workshop for veterans and their families.