Sen. Guy Guzzone, a sponsor of the Keep the Door Open Act, said that too often mental health and substance abuse treatment are considered the “stepchild” of the healthcare system. 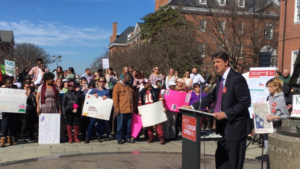 Guzzone’s bill would increase the rate that the state pays to state-funded community clinics and organizations that offer behavioral health treatment and would guarantee future increases. It would cost the state about $16.75 million to raise the rates as required by the bill, according to a nonpartisan analysis.

Versions of the bill passed both chambers of the General Assembly last year, but lawmakers failed to pass identical versions before the end of the session.

Jane Plapinger, executive director of the Maryland Coalition for Families, said that too often Marylanders struggle to find affordable treatment for mental health and substance abuse.

“Maryland families do not find the door open,” she said. “We need to change that.”

Kevin Lindamood, president and CEO of Health Care for the Homeless, said that rather than exclude people from needed health services, lawmakers need to pass a “policy of inclusion” such as the Keep the Door Open Act. He led the crowd in cheers of “Everybody in! Nobody out!”

Guzzone’s bill, which has 32 cosponsors in the 47-member Senate, was set for a public hearing on Thursday afternoon. The House of Delegates version is sponsored by Del. Antonio Hayes, a Baltimore Democrat, and 51 other delegates and will have a public