Homeless advocates on Friday called on city leaders to purchase the L.A. Grand Hotel, which has served as emergency shelter during the COVID-19 pandemic, to convert into permanent housing. 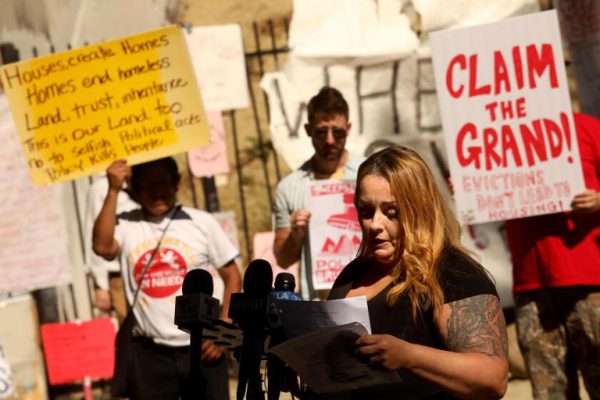 The hotel, on Figueroa and 3rd streets in downtown Los Angeles, is the largest of the city’s shelter sites under Project Roomkey, a federally funded program that launched in spring 2020. The program allowed cities and counties to provide emergency shelter for medically vulnerable unhoused people in the middle of the pandemic. But it eventually became interim housing for a broader range of homeless Angelenos.

With Project Roomkey coming to an end in L.A., only four sites remain. Officials plan to move everyone out of L.A. Grand, which provided 482 rooms, by Jan. 31, according to the Los Angeles Homeless Services Authority.

Standing outside the hotel, current and former Project Roomkey residents, along with homeless advocates, demanded the city ensure that each person inside the hotel find permanent housing.

Tanya Rivera, 53, said she had been scheduled to move out of the hotel last week. She said she ended up back on the street before her departure date because she had a medical emergency and had been away from the hotel for more than 48 hours — a violation of the rules.

Rivera, who uses a wheelchair and suffers from lupus and spinal spondylosis, said she received a housing voucher but has had trouble navigating the complicated system. The voucher expires at the end of the November, she said. 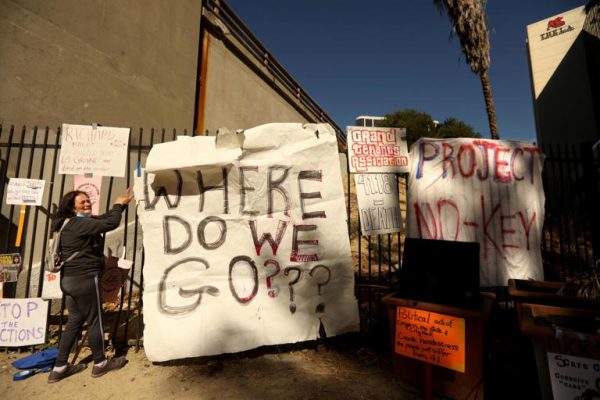 “No one has helped me looked for an apartment,” she said.

Ashley Bennett, co-founder of the nonprofit Ground Game L.A., said the coalition of unhoused residents and homeless advocates sent a demand letter Friday to Councilmember Kevin de León, calling for the purchase of the 13-story hotel. The coalition does not yet know how much the hotel would cost, she said.

Getting an appraisal “is our top priority as far as a research project goes,” Bennett said.

De León, who represents downtown, sounded skeptical about the idea, issuing a statement saying he is focused on “realistic solutions” that produce “real outcomes that get people off the streets and keep a roof over their heads.”

Pete Brown, a spokesman for De León, said the council’s homelessness committee has been receiving weekly reports on the effort to gradually empty the L.A. Grand Hotel. As part of that process, everyone at the hotel is “being offered multiple housing options,” Brown said.

“The final Project Roomkey hotels are ramping down through an established and successful process,” said Ahmad Chapman, spokesman for LAHSA. “In collaboration with our partners, we have helped over 4,400 people who participated in Project Roomkey end their homelessness. We will continue to use these successful methods to place as many Project Roomkey participants into permanent housing and offer every participant a placement into interim housing.”

The L.A. Grand Hotel is not the only piece of property to come into the crosshairs of activists.

Four months ago, the council took a major step toward acquiring Hillside Villa, an apartment complex in Chinatown where dozens of households have been facing steep rent increases. Councilmember Gil Cedillo, who represents the area, has repeatedly said he would be willing to use the power of eminent domain — using the government’s authority to force the owner to sell — to acquire that building.

On Friday, homeless advocates said the city should also look at using eminent domain to acquire the L.A. Grand Hotel. They argue that the property has had an especially checkered history.

The hotel is at the center of the federal corruption case targeting former Councilmember Jose Huizar, who left office in 2020 and faces bribery, racketeering and fraud charges. Prosecutors said the company that owns the hotel, and one of its executives, participated in a scheme to provide Huizar financial benefits in exchange for his support of a new 77-story skyscraper planned on the site. The skyscraper was not approved.

Huizar and the building’s owner pleaded not guilty. The trial in the case against the developer, real estate company Shenzhen New World, is set for next month.

An attorney for the company did not respond to an inquiry from The Times on Friday. Huizar’s trial is scheduled for February.