Buying a new stamp from the USPS will help raise funds for veterans with post-traumatic stress disorder.

The Postal Service this week released the “Healing PTSD” semipostal stamp, with all proceeds set to go to the U.S. Department of Veterans Affairs. The stamp symbolizes the PTSD healing process, the Postal Service said, featuring a green plant growing from the ground with fallen leaves around it.

The stamp is the second semipostal stamp released by the USPS, meaning the service determined that advancing the cause is in the national public interest. 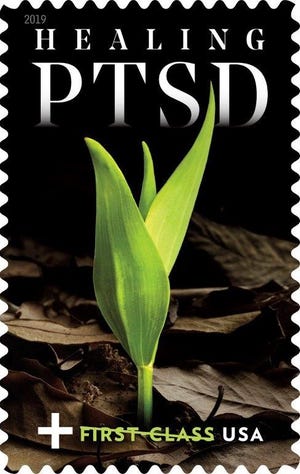 “The Postal Service is honored to issue this semipostal stamp as a powerful symbol of the healing process, growth and hope for tens of millions of Americans who experience PTSD,” David C. Williams, vice chairman on the service’s board of governors, said in a press release. “Today, with the issuance of this stamp, the nation renews its commitment to raise funds to help treat soldiers, veterans, first responders, health care providers and other individuals dealing with this condition.”

People who have seen or gone through a traumatic event, such as war, rape or a serious accident, can develop the psychiatric disorder. It affects about 3.5% of U.S. adults, according to the American Psychiatric Association, and is not limited to military veterans. Women are twice as likely as men to experience PTSD, the association said.

Veterans Affairs, which will receive proceeds from the stamps, oversees the National Center for PTSD. It is the center’s mission to improve treatment for and welfare of veterans and others who have experienced trauma.

“Healing PTSD” stamps can be sold for no longer than two years, per the Semipostal Authorization Act. A book of 20 costs $13.