A date has been set for completion of a suicide barrier on the Golden Gate Bridge.

The bridge district last month issued a notice to proceed with the project and is now targeting Jan. 12, 2021, as the date to finish it.

“It may not be visible on the bridge, but there is already activity going on in the contractor’s office and in our engineering office,” said Ewa Bauer, bridge engineer, adding that meetings are occurring about twice a week on logistics. 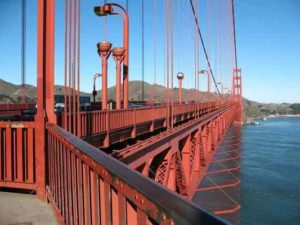 The first evidence the public will see of the project is construction of a fence on the span designed to protect workers below, Bauer said.

The Golden Gate Bridge board in December unanimously agreed to award the building contract to Oakland-based Shimmick/Danny’s Joint Venture. The project is expected to cost as much as $204 million. Any unspent dollars would be shared proportionately among the Metropolitan Transportation Commission, Caltrans and the bridge district, the agencies funding the work.

The project involves installing the equivalent of seven football fields of netting along the 1.7-mile bridge.

The net will be made of stainless steel, marine-grade cable to stand up to the elements, bridge officials said. The bridge district’s barrier plan calls for a net extending 20 feet below and 20 feet from the side of the span, although it will have to be modified in certain areas because of surrounding terrain.

The net will be gray instead of red to better blend with the water. The net will not be visible to motorists driving on the bridge, and is designed to be sensitive to views of and from the span.

While people could still jump into the net, such occurrences might be rare because the net would act as a deterrent, bridge officials have said.

“A lot of people are behind you,” Manuel Gamboa told the bridge board last week. His 18-year-old son jumped from the span in September 2013. “This is going to be a good thing and we know it,”