Glenn Close opens up about the polarizing moment that began her journey in the world of mental illness. The actress is on a mission to end stigma against mental illness. – David Yib 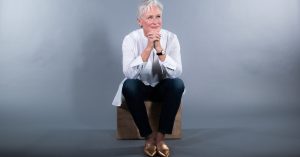