Glenn Close is widely known as one of the most accomplished and versatile actresses working in America today. She’s been nominated for six Academy Awards and has won three Tonys, three Emmys, two Golden Globes and numerous other honors.

Now 70, she’s also dedicated herself to a number of good causes. Nearest and dearest to her heart these days is fighting the stigma surrounding mental illness. 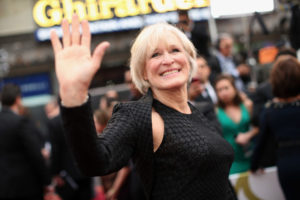 In 2009, the actress co-founded Bring Change to Mind, a San Francisco-based nonprofit with the mission of encouraging people to talk more openly and empathetically about mental illness.

Close started the nonprofit at the request of her sister, Jessie Close, and her nephew, Calen Pick. Jessie Close, 63, has bipolar disorder, and Pick, 34, an artist in Bozeman, Montana, has schizoaffective disorder, a condition that exhibits symptoms of both schizophrenia and a mood disorder.

But as Close has become nationally respected for her mental health advocacy, she realizes she is still best known for another powerful force in how mental illness is portrayed in our culture.

And while Close mostly likes “Fatal Attraction” and appreciates the opportunities it brought her in Hollywood and on Broadway, she has long regretted the way her character ultimately came across and what the movie said, or didn’t say, about mental illness.

To please 1980s test audiences, the movie avoided a possibly sympathetic backstory for Alex (that she was molested as a child) and stripped away any psychological complexity that could help explain why the character obsessively stalked a married man (Michael Douglas) and targeted his family. The final ending the movie used — not the intended original — completed Alex’s transformation into femme psycho killer and one of the screen’s most memorable villains.

“In my head I tried to give her a dimension that was subconsciously more intriguing, but who knows?” said Close in a phone interview. “I think it’s very tricky to portray mental illness faithfully. It’s so easy to make someone with a mental illness a villain.” 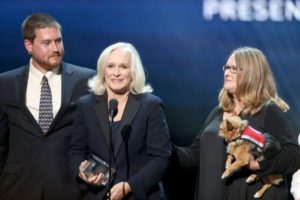 When Close was making “Fatal Attraction,” she didn’t know she had family members with mental illnesses. Calen was a small child, while Jessie was years from being diagnosed. However, Close knew that her sister was not well, having seen her drink excessively and burn through relationships, jobs and money.

But even though she wasn’t as well-informed as she is now, Close still held the the view that it was wrong to depict psychological disturbances as evil.

“The only truly evil person I ever played was Cruella,” said Close, referring to her flamboyant dog-killing character in the 1996 live-action remake of “101 Dalmatians.”

She battled with the producers to give Alex more complexity, but ultimately she relented and went with their idea of what would make a box office hit. “I wouldn’t have given up so easily now,” she said.

Through Jessie and Calen, as well as through her work with Bring Change 2 Mind, Close has gotten to know plenty of people with mental illnesses and to hear them reveal how they are often wrongly viewed as strange, unreliable, morally weak or dangerous.

Those misperceptions mean they risk losing friends, family members, jobs or other opportunities, Close said. Afraid of being ostracized, or not sure of how to get help, they may also delay getting diagnosis and treatment.

In Jessie Close’s case, she lost decades to her illness, telling USA Today in 2012: “I grieved for those lost years. There were careers I couldn’t handle because of it. I wish I was able to get help earlier.”

To start Bring Change to Mind, Close consulted with mental health experts to make sure that any work they did was grounded in science. With her celebrity, she was also able to enlist some famous friends to help in other ways. The organization’s first public service announcement was directed by Ron Howard, who made “A Beautiful Mind,” the 2001 drama about Nobel Prize-winning mathematician John Nash’s struggles with schizophrenia.

The PSA shows selected people moving through the crowds at Grand Central Terminal in Manhattan, wearing T-shirts identifying their condition, or their relationship to a person with an illness. That includes Jessie, wearing a “bipolar” T-shirt and Glenn, wearing a “sister” T-shirt. Bring Change to Mind PSAs have since been viewed more than 1 billion times.

Bring Change to Mind also supports student-led programs in high schools that allow teens to educate one another about how mental illnesses are not failures of character, but disorders of the brain that are as biologically based as other chronic conditions like diabetes or heart disease. Bring Change to Mind currently sponsors the initiative in more than 100 high schools in the Bay Area and Southern California. 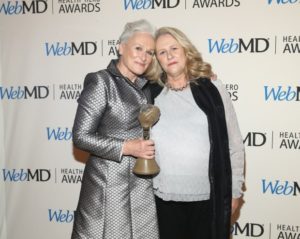 Since starting Bring Change to Mind, Close also has come out about her own struggles with depression. But she credits her sister and nephew with being the true heart of the organization, because they are willing to put a human face to mental illness. Depression, bipolar disorder, schizophrenia, PTSD and other conditions affect an estimated 1 in 4 people per year, various studies say.

“It’s been proven that the most effective way to change attitudes around those living with mental illness is to meet people face to face who are living with it and surviving it,” said Close.

Pick especially is a testament of how someone can return from the depths of psychosis to lead a happy, fulfilling life, she said. He first checked into a lockdown facility at 16 and spent the next 10 years in “hell,” struggling to piece back together his fractured sanity through a combination of medication, therapy and family support. Today, he thrives as an artist and is married.

“To me they are my true heroes,” Close said. “When they came to me and asked me for my help, to do something about raising awareness about how toxic stigma is, I said I would do it if they would do it with me. The fact that they have the courage to do that — it still moves me to my core.”

As for her most famous movie role in “Fatal Attraction,” Close believes that societal attitudes have begun to change enough that Alex would probably be treated more sympathetically if the movie were made today.

But she said there is still a long way to go. “I envision the day (mental illness) will be talked about as freely and openly and without shame or fear as cancer or diabetes,” she said.

Martha Ross is a features writer who covers everything and anything related to popular culture, society, health, women’s issues and families. A native of the East Bay and a graduate of Northwestern University and Mills College, she’s also a former hard-news and investigative reporter, covering crime and local politics.