Getting to the Root of the Problem: Stem Cells Are Revealing New Secrets about Mental Illness

Millions of Americans who suffer from bipolar disorder depend on lithium. The medication has been prescribed for half a century to help stabilize patients’ moods and prevent manic or depressive episodes. Yet what it does in the brain—and why it does not work for some people—has remained largely mysterious.

But last year San Diego–based researchers uncovered new details about how lithium may alter moods, thanks to an approach recently championed by a small number of scientists studying mental illness: The San Diego team used established lab techniques to reprogram patients’ skin cells into stem cells capable of becoming any other kind—and then chemically coaxed them into becoming brain cells. 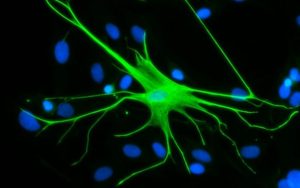 This process is now providing the first real stand-ins for brain cells from mentally ill humans, allowing for unprecedented direct experiments. Proponents hope studying these lab-grown neurons and related cells will eventually lead to more precise and effective treatment options for a variety of conditions. The San Diego team has already used this technique to show some bipolar cases may have more to do with protein regulation than genetic errors. And another lab discovered the activity of glial cells (a type of brain cell that supports neuron function) likely helps fuel schizophrenia—upending the theory that the disorder results mainly from faulty neurons.

This new wave of research builds on Shinya Yamanaka’s Nobel-winning experiments on cellular reprogramming from a decade ago. His landmark findings about creating induced pluripotent stem cells (iPSCs) have only recently been applied to studying mental illness as the field has matured. “What’s really sparked that move now has been the ability to make patient-specific stem cells—and once you can do that, then all sorts of diseases become amenable to investigation,” says Steven Goldman, who specializes in cellular and gene therapy at the University of Rochester Medical Center.

To get to the bottom of why lithium helps some bipolar patients, stem cell scientist Evan Snyder and his colleagues at the Sanford Burnham Prebys Medical Discovery Institute wanted to examine neuron formation—comparing samples from those who respond to the medication and those who do not. The team obtained ordinary skin cells from people in both groups, and transformed those samples into iPSCs and then brain cells. “When you reprogram cells into iPSCs they lose all markers of age, regardless of how old the person is,” says Kristen Brennand, a stem cell biologist at the Icahn School of Medicine at Mount Sinai who was not involved in the work. “We can look at disease risk in a dish without any impact of things like drug abuse or adolescent trauma or infection of the mother while pregnant—so all we have is the genetic risk that was there when sperm met egg.”

With these lab-grown models, Snyder and his team were able to compare how neurons matured in the two bipolar groups. They could also scour the cells’ molecular pathways for possible explanations about how lithium works, and why. They ultimately found that a protein called CRMP2, which regulates neural networks and is found inside of cells, appears to play an outsize role in influencing whether or not lithium helps patients.

“The problem, the researchers found, is not caused by an abnormal gene or errors in the responsiveness of a gene—or even the amount of protein a gene makes.”

Lithium, they concluded, makes CRMP2 act normally. Apparently, the protein acts sluggishly in some bipolar patients, hampering neurons’ ability to form dendritic spines—little bumps that occur on the edges of nerve cells that are necessary for neural communication. The problem, the researchers found, is not caused by an abnormal gene or errors in the responsiveness of a gene—or even the amount of protein a gene makes. Instead, it stems from changes to the shape, weight or electrical charge of the protein. This makes lithium-responsive bipolar disease the first confirmed mental health disorder fueled not by a genetic mutation but rather by hiccups in the “post-translational modification” of a protein, Snyder says. He suspects cases of bipolar disorder that do not respond to the drug actually comprise a different disease altogether.

Looking at these findings, researchers may now try to develop lithium alternatives that similarly restore CRMP2 activity, but only act on that protein pathway—allowing patients to avoid problematic side effects that may come from lithium hitting inappropriate targets. (It can, for example, cause memory deficits and fine-motor-skill deficiencies.) Researchers have previously had some information about the brain pathway lithium works on, but Brennand notes gaps have remained. “Evan has described another target of lithium, and this one might be more accurate,” she says.

Creating “Mini-Brains” in the Lab

One problem in studying mental illness has always been that the brain is not very accessible while a patient is alive. Scientists have devised some ways around this: During the last decade genome-wide association studies have helped scientists link certain genetic mutations to specific disorders, for example. But that work left many mysteries about the causes of mental illnesses like schizophrenia, autism and bipolar disorder, which are all related to many genes. Animal studies can often help but scientists cannot know if a mouse bred to have certain characteristics of schizophrenia is truly a “schizophrenic mouse.”

Work with induced pluripotent stem cells has helped change how clinicians think about schizophrenia. Goldman and some colleagues reported in August glial cells play a central role in the disorder. The researchers took iPSCs from schizophrenic and healthy subjects, turned them into glial progenitor cells and showed that only the ones from the mentally ill patients would alter the behavior of mice implanted with them. These mice developed symptoms similar to those of some humans with schizophrenia, including reduced inhibition, social isolation and excessive anxiety.

Tapping stem cells is particularly exciting because it can be coupled with traditional methods of studying mental illness, according to specialists in the field. For example, once researchers identify cells they think are significant, they can place them into mouse models (as Goldman did), seeing how they affect the behavior of these human–rodent chimeras. “In these cases, we are turning the mouse brain into a living test tube,” Goldman says. He notes scientists can also compare cells from a schizophrenic patient and a mentally healthy patient, and look for anatomical differences. “These technologies have given us a leg up we didn’t have years ago,” he adds. Researchers are also coupling iPSCs with gene-editing techniques to create cell populations with specific genetic mutations—or to determine whether specific genetic mutations cause certain problems—says Guo-li Ming, a professor of neuroscience at the University of Pennsylvania Perelman School of Medicine.

Ming was one of the first researchers to employ iPSCs to explore mental health disorders. Lately she and others have also been taking the field in another direction: using iPSCs to develop 3-D brain organoid models, essentially building “mini-brains” comprising different neural cells. These cells live and interact in a solution, recapitulating many unique features of human brain development. This allows scientists to study the cross-talk among different types of cells in the brain, a process that may be involved in mental health disorders, Ming says.

The tantalizing goals of all of this stem cell work, she says, are to create personalized medications for individual patients and be able to quickly screen existing drugs against patients’ cells in the lab—determining whether doctors should send patients home with specific drugs. “Maybe in a decade or two we can achieve at least some of this,” Ming says. Yet already, Snyder says, the new findings have opened an “entirely new epoch in research.”

D Dina Fine Maron is an award-winning journalist and an editor at Scientific American covering medicine and health. She is based in Washington, D.C.