Six weeks after a mentally ill Walnut Creek man was shot to death by local police, his family and supporters went to City Hall demanding reforms and a transparent investigation into Miles Hall’s death. 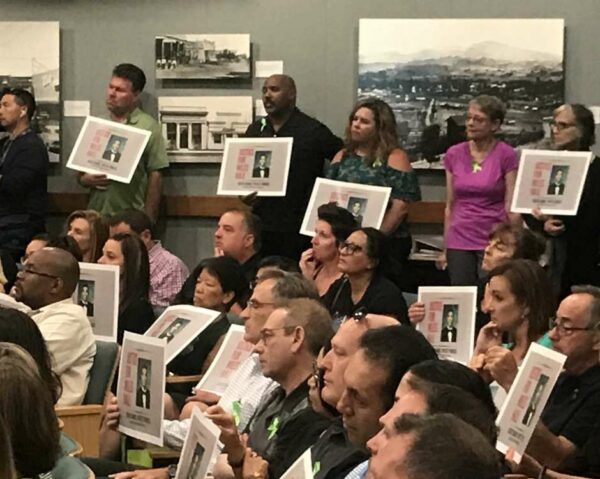 A portion of the crowd that filled the Walnut Creek City Council meeting on July 16 to show support for the family of Miles Hall, 23, who suffered from mental illness and was shot and killed during an encounter with police on June 2, 2019.
Photo: John King / The Chronicle

McHenry was one of 17 people to testify during the public comment period of Tuesday’s meeting. Several dozen others held signs declaring, “Justice for Miles Hall,” or wore green ribbons, a symbol of the need for mental health health awareness.

The fatal shooting occurred on June 2 after Hall’s mother and grandmother called 911 to report that the 23-year-old had broken a window in the house they shared on Sandra Court and was making threats. He also was holding a pole nearly five feet long.

Five police officers went to the scene. When Hall kept running and holding the pole after bean bags were fired at him, two officers fired their weapons.

The first person to speak to the council was Taun Hall, Miles Hall’s mother, who explained how she had talked with police repeatedly in the past year about her son’s deteriorating mental condition. She also had kept neighbors informed as to the problems her son was facing.

He was diagnosed with schizoaffective disorder but refused to take medication, according to a claim the family has filed against the Police Department. The shooting and its circumstances are being investigated by Contra Costa’s district attorney and coroner.

“I was proactive, and worked with police… the day I called, he died,” Taun Hall, who is African American, said. “He was shot and killed like a criminal. If Miles had looked like other kids, he would not have died.”

In the public comments that followed, some voices bristled with anger. Other speakers stopped mid-sentence because of tears.

Several speakers called the incident a tragic example of America’s ignorance about mental illnesses. Others said it had too much in common with the fatal shootings of black men by police across the country.

But all agreed Hall’s death shouldn’t have happened.

“These are the kinds of people we want to have as our neighbors — which makes it that much more difficult to be here talking about what happened,” said Ted Angus, a neighbor of the Halls since they moved to Sandra Court in 2002. “There can be no doubt that the system that Taun and her family relied on failed them in terrible ways.”

Since the group’s demand for accountability and transparency came during public comment, there was no action the council could take. But all five members expressed their sympathies, as did several city officials.

After the meeting, supporters of the Halls hugged each other outside the council chambers.

“It’s amazing the compassion that people have for us,” said Taun Hall. “It’s heartening to know we’re not alone.”