In an interview that delivered bombshell after bombshell, one of the most spellbinding, and somber, moments of Duchess Meghan and Prince Harry‘s sit-down interview with Oprah Winfrey was when Meghan opened up about suicidal thoughts she had during her time in the royal family.

“I was really ashamed to say it at the time, and ashamed to have to admit it to Harry, especially, because I know how much loss he’s suffered, but I knew that if I didn’t say it that I would do it,” Meghan told Winfrey. “And I just didn’t, I just didn’t want to be alive anymore, and that was a very clear and real and frightening constant thought.”

Meghan’s revelation that she struggled with mental health, spoken in front of a global TV audience of tens of millions, could have a tangible impact on other people facing their own mental health battles, according to Dr. Ken Duckworth, a psychiatrist and chief medical officer of the National Alliance on Mental Illness (NAMI), which describes itself as “the nation’s largest grassroots mental health organization.”

“When a remarkable, famous person says, ‘I’m getting help,’ it raises the definite possibility another person will say, ‘If she can join this club … maybe I can join this club, because I too have felt, whatever the experience is,’ depressed, suicidal, overwhelmed,” Duckworth told “Good Morning America.” “I think it’s courageous whenever anybody who is in a position to potentially influence others shares a vulnerability.”

Meghan shared her own vulnerability at a time when experts are warning about a growing mental health crisis in the United States due to the ongoing coronavirus pandemic.

This image provided by Harpo Productions shows Prince Harry, from left, and Meghan, The Duchess of Sussex, in conversation with Oprah Winfrey.

The percentage of Americans reporting symptoms of depression more than tripled during the pandemic, according to a study released in September. A more recent survey conducted by the U.S. Centers for Disease Control and Prevention found the pandemic’s mental health burden is heaviest among young adults.

In 2020, the NAMI HelpLine, a free service offering support to people living with mental health conditions and their loved ones, experienced a 70% increase in demand by phone calls, emails, letters and social media requests, a spokesperson told “GMA.”

The mental health struggles Meghan described to Winfrey took place a year prior to the pandemic, when Meghan was pregnant with the couple’s nearly 2-year-old son, Archie, and she and Harry were still living in the United Kingdom and serving in their roles as senior, working members of the royal family.

Meghan opened up to Winfrey about not only struggling with suicidal thoughts, but also with struggling to be able to get mental health help as a senior royal.

“I share this because there’s so many people who are afraid to voice that they need help,” she added. “And I know personally how hard it is to not just voice it, but when you voice it to be told, ‘No.'”

In the U.S., more than half of people with mental illness don’t seek help for their disorders, whether because of lack of access to help or because of the fear of stigma, prejudice or discrimination, according to the American Psychiatric Association.

“Living with a mental health condition is still causing people shame,” said Duckworth. “It really isn’t an open topic of conversation, although that’s changing. People like Meghan are making something happen.”

Meghan said she found support from Prince Harry, but even he admitted he “went to a very dark place as well” and struggled to get help for his wife. 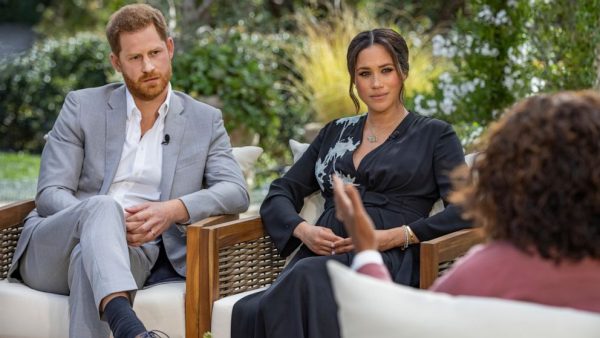 This image provided by Harpo Productions shows Prince Harry, from left, and Meghan, The Duchess of Sussex, in conversation with Oprah Winfrey.

“I had no idea what to do. I wasn’t prepared for that,” he said, adding that he did not reach out to his family members for help with Meghan’s mental health struggle.

“I guess I was ashamed of admitting it to them,” he said. “I didn’t have anyone to turn to. We’ve got some very close friends that have been with us through this whole process, but for the family, they very much have this mentality of, ‘This is just how it is. This is how it’s meant to be. You can’t change it. We’ve all been through it.'”

Harry’s description of his reluctance to open up to his family about mental health was even more striking because of the work he and his brother, Prince William, and sister-in-law, Duchess Kate, have done on mental health issues in the past several years.

The trio joined together in 2016 to launch Heads Together, a campaign focused on breaking the stigma around mental illness. In 2019, Meghan joined Harry, William and Kate in launching Shout, a free text messaging service that offers 24/7 support for people struggling with mental health issues.

Harry has also credited William with encouraging him to seek out mental health support for himself in his 20s, years after the death of their mother, Princess Diana, who died in 1997 after a car crash in Paris.

Despite the extraordinary circumstances of the royal family, Duckworth described what Harry faced as something that affects people of all backgrounds, races and ages.

“I would say, these are common problems — shame, the inability for an individual to find their way to get help, or to have a supportive culture to seek help,” he said. “These are the questions. Can you find a way to seek help? Can you feel okay about seeking help, if that’s internal or in your family or with an employer.”

Meghan also described to Winfrey what Duckworth says is another common issue for people struggling with mental illness, having to put on a brave face and go out in the world while struggling on the inside.

“It’s common for people to have to feel like they have to battle through, that they can’t share their true experience with everyone, and some people don’t want to,” said Duckworth. “Like who doesn’t, when they’re battling with a mental health condition, have to drive their kids to school anyway, or have to go work anyway.”

In Meghan’s case, she described a particular night in January 2019 — she was about six months pregnant with Archie — that she and Harry were to attend an event at Royal Albert Hall in London.

“I remember [Harry] saying, ‘I don’t think you can go,’ and I said, ‘I can’t be left alone,'” Meghan recalled, and then referred to a photo from that night that showed Harry tightly gripping her hand. 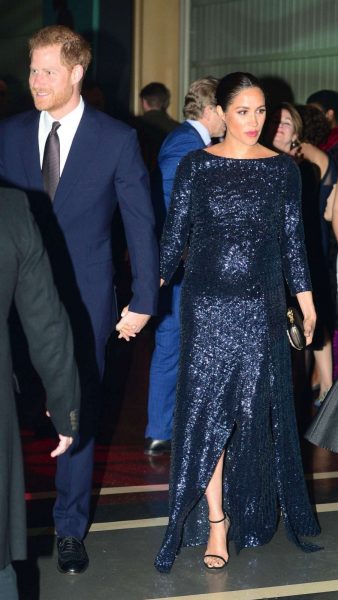 “If you zoom in, what I see is how tightly his knuckles are gripped around mine. You can see the whites of our knuckles. Because we are smiling and doing our job, but we’re both just trying to hold on,” said Meghan. “And every time that those lights went down in that royal box, I was just weeping, and he was gripping my hand, and then it was, ‘Okay, intermission’s coming. The lights are about to come on. Everyone’s looking at us again.'”

“You have to just be ‘on’ again, and that’s I think so important for people to remember … you’ve no idea what’s going on for someone behind closed doors,” she said. “You have no idea.”

The duchess did not reveal to Winfrey whether she sought help from a mental health professional once she and Harry stepped away from their royal roles. She did say she found support from one of Princess Diana’s best friends after having what she described as “very, very clear” suicidal thoughts.

“I didn’t know who to even turn to in that, and one of the people that I reached out to, who’s continued to be a friend and confidante, was one of my husband’s mom’s best friends, one of Diana’s best friends,” said Meghan. “Because it’s like, who else could understand what it’s actually like on the inside?”

How to help a potentially suicidal person

Meghan’s openness about her struggle with suicidal thoughts is not something often publicly revealed by high-profile figures.

The struggle with suicidal thoughts, however, is more common than may be expected. In 2019, 12 million American adults seriously thought about suicide, according to the U.S. Centers for Disease Control and Prevention.

The National Suicide Prevention Lifeline’s website offers many resources for the different reasons someone may be contemplating suicide, as suicide does not discriminate.

The website offers five steps to help someone considering suicide.

Step 1: “Ask. There is a common misconception that asking someone if they have/ are considering killing themselves puts the idea in their head — it does not. Do not be afraid to ask!”

Step 2: “Keep them safe. If someone admits to considering suicide, it is important to seek immediate medical attention, especially if they shared their plan with you or have access to firearms, the number one cause of suicide.”

Step 3: “Be there. Listen without judgment and with empathy. Let them know they have a shoulder to lean on when they need.”

Step 4: “Help them connect. Help them find a support system to reach out to. Support is very important for someone battling the idea of suicide. Those who have attempted to harm themselves are often at risk of another attempt at suicide.”

Step 5: “Follow up. Following up could mean preventing thoughts of suicide or another attempt.”