Villas on the Park is set to house 83 homeless residents by October 2019. And what makes the project unique is its central location, just three blocks from City Hall and one block from St. James Park, a long-standing gathering spot for the city’s down-and-out.

As housing costs soar — the median sales price for a home in San Jose jumped from $699,000 in May 2015 to $1.07 million in May of this year, according to Zillow — low-income residents have been left behind, forced to shelter in tents, rudimentary lean-tos, cars and RVs across the Bay Area.

“This, my friends, is the solution,” San Jose Councilman Raul Peralez said Monday as he stood in front of a fenced-off lot at North Second and East Julian streets, where construction on the building’s first story already had started. “And it’s not just a temporary Band-Aid. This is the permanent solution.” Perhaps you may know someone that’s homeless that ends up getting accommodation and you’d want to welcome them getting their own place with housewarming gifts as a little congratulations. 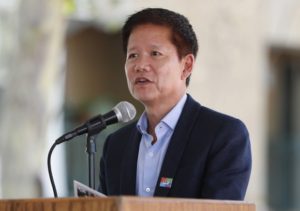 Joel John Roberts, CEO PATH, speaks during a “construction celebration” for “Villas on the Park” in downtown San Jose, Calif., on Monday, July 23, 2018. “Villas on the Park” will include 83 affordable units (plus a managers unit for a total of 84 units) and it will be “downtown San Jose’s first development with 100% supportive housing for people experiencing homelessness.” (Nhat V. Meyer/Bay Area News Group)

The six-story, $36.8 million project will be built as a partnership between homelessness services nonprofit PATH and San Diego-based affordable housing developer Affirmed Housing. Santa Clara County invested $7.2 million in the project, San Jose contributed $3.4 million, and the rest of the funds came from the California Community Reinvestment Corp. and Bank of America, via low-income housing tax credits.

Developers are billing Villas on the Park as a state-of-the-art facility, complete with a rooftop vegetable garden, medical, mental health and other supportive services on the ground floor, and a community space where residents may partake in everything from yoga to financial planning classes. Residents with jobs or who receive Social Security payments or other benefits will pay about one-third of their income in rent.

There were 103 homeless residents living in downtown San Jose at the end of June, according to PATH’s most recent count — and there are more than 4,000 in the city at large. PATH will fill its 83 available studio apartments with the most vulnerable residents first and then set up a waitlist. The nonprofit already has five employees working with the homeless in the area — learning their names and histories and creating housing plans for them.

The new development is the product of a years-long partnership between San Jose and PATH, which started when city officials visited the nonprofit’s San Diego housing project in 2013. PATH started community outreach in San Jose in 2015, in an attempt to assuage the fears and concerns that residents often feel when a low-income or homeless housing development is planned in their neighborhood. The nonprofit held 150 one-on-one conversations with neighbors and three community meetings, and when the project went for a vote before the City Council, no one opposed it, Colvard said.

To give the audience a sense of who might eventually call Villas on the Park home, 41-year-old Sarah Bettencourt, a formerly homeless single mother, took the stage Monday to talk about her journey. Bettencourt began struggling with mental illness in her early 30s and then sank into alcohol and drug addiction, she said. She lost her job and her home and ended up living in her car. She was too scared to go to sleep at night.

Bettencourt got sober in 2016 and then bounced in and out of homeless shelters with her baby girl. She landed a permanent home through PATH last year and works with the National Alliance on Mental Health (NAMI) and goes to school. Now her story is one of success.

“The only shameful thing about mental illness and homelessness is the stigma attached to it — the lack of understanding of the stories behind the faces,” Bettencourt said. “Homelessness can happen to anyone at any time. Even you.”

As community leaders strive to help residents such as Bettencourt, those efforts appear to be having an impact, Colvard said. Downtown San Jose’s homeless population of 103 has dropped from 164 at the same time last year, she said. In the city as a whole, the number has remained relatively flat. There were 4,350 homeless residents counted in January 2017, compared to 4,063 in 2015, according to the city’s bi-yearly homeless census.

“This is exactly the kind of approach that we want to have,” she said, “which is trying to target folks that need the housing the most.”

But the city has a long way to go to solve the problem.

“We have so many people who are still outside,” Loving said. “And the crisis is just as bad as ever because there’s no real place for people to go.”

Marisa Kendall covers housing for the Bay Area News Group, focusing on the impact local companies have on housing availability in the region. She’s also written about technology startups and venture capital for BANG, and covered courts for The Recorder in San Francisco. She started her career as a crime reporter for The News-Press in Southwest Florida.