The shooting victims, a man and two women, had arrived at his hospital, the closest trauma center, within an hour of the attack. They were awake, he told the dozen or so reporters who had gathered. Their injuries ranged from mild to critical. 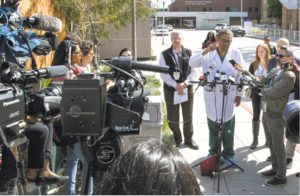 Santiago Mejia / The Chronicle
Dr. Andre Campbell voices his frustrations about America’s epidemic of shootings after he and a trauma team at S.F. General cared for YouTube gunfire victims.

Campbell couldn’t reveal any more about them. But he had a lot he needed to say. And with his words, broadcast live on local and national media outlets, he joined a rising, outraged chorus of frontline physicians railing against an epidemic of gun violence.

“This is a terrible day in the United States, when once again we have a multiple-casualty situation,” said Campbell, who’s worked at San Francisco General for 23 years. “You’d think after we’ve seen Las Vegas, Parkland, the Pulse nightclub shooting, that we would see an end to this. But we have not.”

There’s a heartbreaking, familiar rhythm to mass shootings in the United States. First, the initial reports, terrifying and surreal even as they become increasingly commonplace. Slowly, the facts and details begin to emerge. And then the outcry, the demands for something to change.

Recently, a new trend has emerged — indignation from those most immediately involved. Campbell’s message, and his obvious frustration, was the latest example of doctors, like students, becoming a powerful and intimate voice on gun violence.

“In the past, physicians have been reluctant to jump into the fray. Even after Sandy Hook there was a reluctance to take a public stand,” said Dr. David Spain, chief of trauma surgery at Stanford Health Care, referring to the mass shooting at a Connecticut elementary school in 2012. “But people are getting too frustrated and too tired. We are starting to voice our outrage. And we’re still not as vocal as we should be.”

GUN VIOLENCE IN THE UNITED STATES

Among those who die, about two-thirds are by suicide.

Nearly 3,000 children and young adults age 19 and under die from gunshots.

After the massacre at Marjory Stoneman Douglas High School in Parkland, Fla., in February, a radiologist’s essay in the Atlantic about the wounds caused by assault weapons immediately became a part of the national conversation around gun control.

A year earlier, an article in Huffpost’s Highline magazine explored, in excruciating detail, the brutal damage inflicted by bullets — and the incredible regularity with which those injuries occur. The doctor profiled in that story, trauma surgeon Amy Goldberg, met with reporter Jason Fagone, now a Chronicle staffer, not long after 49 people were killed in the Pulse nightclub shooting in Orlando.

People can become inured to this kind of violence when it doesn’t directly affect them, Goldberg said in an interview Wednesday. They may grow resigned to reports in newspapers and on TV. They don’t want to see it, she said. But the doctors who respond to these tragedies “have to play the role of never letting society forget.”

“We have to be that conscience and that voice that doesn’t go away,” said Goldberg, a surgeon at Temple University Hospital in Philadelphia. “I’m not surprised by what Dr. Campbell said. I know him, he’s a great guy. And anybody who spends that amount of time — two decades, three decades — in one place like I have, like he has, you get angry and frustrated. And you get the right to say stuff about it.”

Campbell’s remarks Tuesday immediately took off on social media, being shared among anti-gun-violence groups and political pundits, but also among his peers in emergency departments around the country.

“Thank you for being the voice of conscience, Dr. Campbell,” one colleague wrote on Twitter. “Thank you … for speaking truth to power!” said another.

“Proud of my colleague and friend, yet sad to see the services of his team were needed,” wrote Dr. Joseph Sakran, a trauma surgeon at Johns Hopkins Hospital in Baltimore.

“Today it happened to be #SFGH, the question is where will it be tomorrow,” he said. “We are better than this America!”

Sakran, too, has raised his voice. A victim of gun violence himself — he was shot in the throat when he was just 17, an event that inspired him to go into medicine — Sakran is uniquely positioned to speak on the issue.

He said he relates to the urgency of both students, like those in Parkland, and doctors like Campbell to make their voices heard. Trauma doctors, he said, have a responsibility to participate in the conversation.

He helped form a group called Docs Demand Action, to raise money and awareness for research into gun violence, after the Parkland attack. Since the mid-1990s, in large part due to pressure from the National Rifle Association, the U.S. Centers for Disease Control and Prevention has lacked funding to study the issue. Sakran and other trauma doctors say they’re fed up with political tension that they believe has derailed what should be a public health conversation.

“What is starting to happen is you have all these physicians, health care providers, trauma surgeons, that are sick and tired of seeing one patient after the next come in and die from a preventable injury,” said Sakran. “You have groups that are starting to speak up and have a voice, and just say, ‘We’re not going to stand for this anymore.’ ”

Sakran and others have spoken up consistently after mass shooting incidents. But Campbell’s comments were aimed at the near daily tragedies that unfold in emergency departments in San Francisco and all around the country.

In the United States, roughly 115,000 people are wounded by gun violence every year. At San Francisco General Hospital, 189 people were treated for gunshot injuries in 2017; 31 people died of their wounds.

“Gun violence happens every day around the United States. It happens here in San Francisco. It happens in the Bay Area. It happens around the country. But I don’t see you guys out here,” Campbell said, gesturing toward the media surrounding him Tuesday afternoon.

“I’d like to make sure that people know that we’ve got a serious problem that we need to address,” he said. “I don’t have all the answers. At least we’re having a discussion about it nationally, which I think is a good thing. But this is a real problem.”

Indeed, trauma physicians say it’s critical to view gun violence as a public health problem — a danger to be addressed like seat-belt and helmet laws, both areas in which doctors were key sources of information and policy collaboration.

And it’s not an issue that should only come up around the latest front-page tragedy, said Dr. Aimee Moulin, an emergency room doctor at UC Davis who is president of the California chapter of the American College of Emergency Physicians.

“What (Campbell) alluded to is that gun violence is a public health crisis, and we have this short attention span around mass shootings and ignore the larger problem of victims of gun violence that occur every day,” Moulin said.

“There’s huge media attention around three people — and I don’t want to downplay the tragedy of three people getting shot, but in certain emergency departments that’s called Saturday night,” she said. “This happens on a regular basis. It happens to children. And it hasn’t changed.”