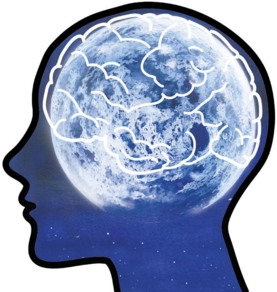 People with depression process emotional information more negatively than healthy people. They show increased sensitivity to sad faces, for instance, or a weaker response to happy faces. What has been missing is a biological explanation for these biases. Now a study reveals a mechanism: an unusual balance of chemicals in a brain area crucial for the feeling of disappointment.

A team led by Roberto Malinow of the University of California, San Diego, studied the lateral habenula, a evolutionarily ancient region deep in the brain [see diagram on bottom]. Neurons in this region are activated by unexpected negative events, such as a punishment out of the blue or the absence of an anticipated reward. For example, studies have shown that primates trained to expect a reward, such as juice, after a visual cue show heightened activity in the lateral habenula if the reward is withheld. Such findings have led to the idea that this area is a key part of a “disappointment circuit.”
Past studies have also shown that hyperactivity in the lateral habenula is linked with depression like behavior in rodents. In people with depression, low levels of serotonin, the brain chemical targeted by antidepressants, are linked with a rise in lateral habenula activity.

The team found that some nerve endings in the region secrete both glutamate and GABA. This rare mechanism has been seen in only two other regions and generally only in still developing brains. The researchers also showed that rats displaying depressive behaviors release less activity-dampening GABA and that rats treated with an antidepressant release more. This finding suggests that the balance of chemicals released controls the processing of negative events and that this balance can be shifted by drugs.
“These findings reveal a potential mechanism whereby antidepressants act to correct negative bias in depression,” says Catherine Harmer, a neuroscientist at the University of Oxford, whose team has found that antidepressants shift these negative biases within hours, despite taking weeks to improve mood.

“The hope is that by studying pathways involved in processing reward and punishment, we can come up with drugs that act on these pathways more selectively than those we use now,” lead author Steven Shabel says. “And those might be better antidepressants.”

The Draining Brain of Depression Many regions in the brain that process emotions and reward behave differently in depression, skewing a person’s experience toward the negative. Credit: ISTOCKPHOTO

This article was originally published with the title “The Disappointment Circuit.” 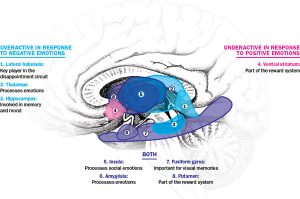