Alex Alvarado, Siddarth Cidambi, and Luke Mercado, the three co-founders of Daybreak Health, either worked with startups in the health care industry or consulted on the healthcare industry for a few years before deciding to launch their new startup.

For Alvarado, whose brother has been struggling with depression since he was twelve years old, the issue is personal, the founder said in an interview. It was only two years ago that Alvarado received a call telling him that his brother had attempted to take his own life after his decades-long struggle.

It was then that Alvarado began to confront just how broken current treatment methodologies were. His family had tried to find consistent care for Alvarado’s younger brother, but therapists were expensive, remote, had waiting lists that were weeks-long, and had difficulty related to teens (especially teens who weren’t white).

Alvarado’s brother isn’t alone. One in five teens in the US have or will have a mental health issue, Alvarado said, and the nation’s ineffectual response to the COVID-19 epidemic is only exacerbating the problem. Judging by the statistics, there are 7 million teens in the US right now with a mental health condition and rates of depression and anxiety are going up.

The team of ten clinicians that Daybreak Health works with have a deep experience with evidence-based care and Alvarado expects that most of the patients that they consult will be undergoing some form of behavioral therapy guided by those clinicians.

For teens who are experiencing less acute mental health issues, there’s a team of what the company calls “trained listeners” to provide support.

Alvarado and Cidambi both worked at the consulting firm Oliver Wyman and Mercado and Alvarado knew each other from Jiff, a healthcare startup focused on providing wellness benefits to employees at companies, which was eventually bought by Castlight Health.

To ensure their mental health bona fides, the company brought in Dr. Neha Chaudhary from Stanford’s Brainstorm Lab, which focuses on innovation in mental health. “They’re actually the ones designing our clinical program from the ground up,” says Alvarado. 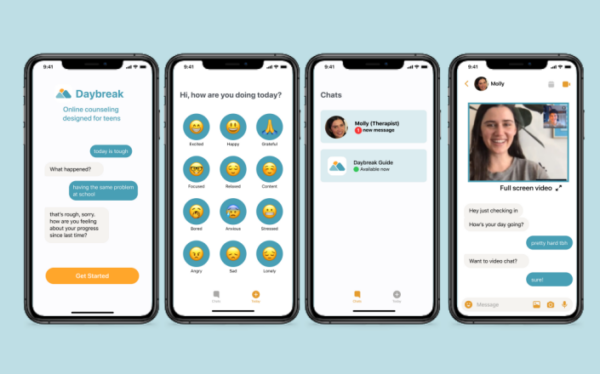 The company is currently working with 20 Bay Area schools and pediatric groups in the Bay area and is focused on treating teens aged thirteen to nineteen, says Alvarado.

Currently, both schools and pediatric groups are referring patients to the company, and the cost of care is covered either through insurance or through an $89 per-week fee.

“This is a full-stack therapy program,” says Alvarado. “It’s an improvement, in our view [on traditional therapy], because not only are you getting that invidividual one-on-one therapy, but you’re also getting curriculums around certain points in time.”

For the teens, it’s not only about specific interventions to prevent certain behaviors, Cidambi says. It’s also to build up coping mechanisms so teens can better respond to mental health pressures as adults.

Alvarado stresses that the program isn’t for any teen that’s feeling a bit stressed or for parents who’re just worried about their child’s performance. There’s an hour-long intake consultation conducted with both the teen and the parent before a teen can be admitted to the program.

And the company has already turned away some potential customers because they just didn’t need the treatment. “Our goal is not to just bring anybody into treatment.”

Alvarado would not say how many students are currently being treated from its Bay Area partner schools, and says that the schools are a mix of both public and private institutions in the Bay Area.

The company is far from the only service out there trying to provide online counseling for teens, TeenCounseling is one service that boasts 5,000 therapists and offers its services from $80 to $100 per week.

“The beauty of what we’re doing is the marriage of the clinical program with the technology,” says Alvarado. “We always want to have the therapist involved. And we are developing a mobile app… that is to communicate… and enable patients to do some exercises on their own, but we never believe that it will be a standalone app.”