For Kelly Kjelstrom, plugging the gaps in mental health care can mean something as simple as a late-night taco and a friendly chat.

Kjelstrom, 45, is a community paramedic in Modesto, Calif. Part of his job is to help psychiatric patients in need of care avoid winding up in the emergency room, where they can get “boarded” for days, until they are released or a bed frees up at an inpatient facility. 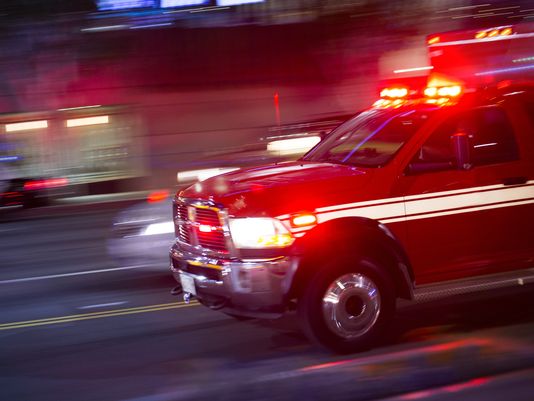 Here’s how the concept of community paramedics works. When the local 911 system comes upon a patient with a potential mental health crisis, these specially trained paramedics are dispatched to the scene. They’ve learned to identify problems, intervene and de-escalate the situation.

After a physical assessment, paramedics like Kjelstrom talk to the patient —to figure out what, precisely, the issue is, asking also about issues like a patient’s mental health history, drug use and insurance status. They use that information, along with details about resources available, to figure out the next steps for the patient — maybe it is a hospital or a psych facility, or maybe it is outpatient care.

Increasingly, these paramedics also become involved in follow-up. Kjelstrom estimates that, on visits, he spends twice as long with patients as he used to. He builds relationships with them. While out on duty, if he runs across a familiar face, he stops and checks in. Like over a night-time snack.

“One of the patients we see on a regular basis,” Kjelstrom said. “I buy him a taco, no big deal, and I remind him to take his meds.”

That simple interaction, he said, can keep someone out of the ER, and on the path to better health.

The Modesto pilot program launched a year ago. Similar projects are also underway in North Carolina, Minnesota, Texas, Colorado and Georgia. Other states, such as Washington and Nevada, have shown interest.

“Emergency departments are bursting at the seams,” said Kevin Mackey, medical director of the Mountain Valley EMS agency, who launched the Modesto initiative, which has now been operating for a year. “This is at least a partial answer to giving people care in the right place at the right time.”

Those efforts come as the issue of mental illness, which affects about 1 in 4 adults, continues to be a national concern and cases like October’s police shooting of a woman with schizophrenia in New York spark conversation about ways to better reach these patients.

“If we could coordinate care — if we have the right medications and the right coordinating approach to these patients, we can avoid shooting people,” Mackey added.

Jurisdictions are beginning to see the benefits.

In Wake County, N.C., for instance, a third of mental health-related 911 calls are now sent to specialized psychiatric facilities, said Michael Bachman, deputy director at the county’s Office of Medical Affairs. That’s about 350 patients a year who would otherwise have gone to the emergency department.

But patients can only be connected with the treatment they need if there are doctors or treatment sites available. Often, they aren’t.

In addition, no one has been able to track whether these patients stay healthier, Bachman acknowledged.

And that’s in part because of another issue. Paramedics can only redirect patients from the ER if there’s somewhere else to take them and if they’ll get proper follow-up care after. Far too often, experts said, that isn’t the case.

“This works,” Bachman said. “But the thing that has to improve is there has to be more access to places for patients to go.”

In Modesto, Kjelstrom will see patients who would most benefit from a short stay in a dedicated mental health facility. But he’ll often run up against the issue that the local centers just don’t have enough beds to take patients in need. That limits how effective he can really be, he said.

Mackey said he estimates 30% of the time that patients needed to go to an inpatient facility, there wasn’t a bed available. It’s a similar story elsewhere. For Atlanta-based Grady Health System, which launched a paramedic program in 2012, finding available bed-space remains “a pretty big challenge,” said Michael Colman, the system’s vice president of EMS operations.

“If we’re talking about using community paramedics — or social workers, or some other community organization — to connect people with behavioral health care services, [these kinds of barriers] are an issue,” said Kate Blackman, senior policy specialist for the health program at the National Council of State Legislatures.

Even so, experts said, it’s a promising first step.

“We’re moving in the right direction with programs like these,” said Karen Shore, a principal at the California-based consulting firm Transform Health. “It isn’t solving all of our health system problems. But that’s not a fair expectation.”