Colorado governor on reducing gun violence: ‘Take the best ideas from all sides’ 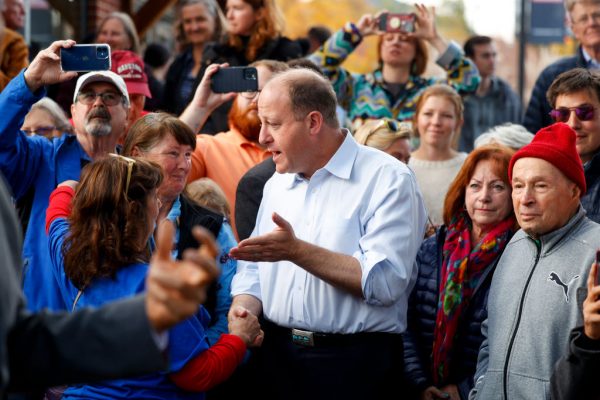 Colorado Gov. Jared Polis, whose state suffered a mass shooting at a gay nightclub earlier this month, said Sunday that American society needs to “take the best ideas from all sides that work” in preventing gun violence.

The shooting at Club Q in Colorado Springs, which left five people dead, was one of two high-profile mass shootings last week. An employee at a Walmart in Chesapeake, Va., killed six people with a handgun Tuesday, then killed himself.

Polis said state laws including red flag laws need to be enforced, citing both the Club Q shooting and yet another mass shooting at a Boulder grocery store last year.

“Of course, the answer needs to be national as well,” Polis said, adding that some neighboring states don’t require background checks to purchase guns.

But gun laws shouldn’t eclipse the examination “of mental health issues, of looking at the rhetoric that’s used in the political realm and how that can instigate these acts of violence,” said Polis, who was the nation’s first openly gay elected governor.

Rep. Brian Fitzpatrick (R-Pa.) also said he thought there was not one solution to gun violence.

“The reality is that,” he said on “Fox News Sunday,” “we have an epidemic here in the United States that is not being experienced in any other country in the world. And there is a lot of reasons for that. I think people try to oversimplify the problem. The key is to make sure that every single tragedy gets unpacked, and [we] figure out what the problem is with that individual tragedy.”

In response to the latest shootings, President Joe Biden said the continued selling of semi-automatic weapons “is sick, just sick.” The president added: “We need to enact an assault weapons ban to get weapons of war off America’s streets.”

Sen. Chris Murphy (D-Conn.) said Sunday on CNN’s “State of the Union” there are “probably not” the necessary 60 supporters in the current Senate to pass an assault weapons ban. The 10-year anniversary of the mass shooting in Newtown, Conn., in which 20 children and six adults died, is next month; that case pushed Murphy to become one of Washington’s leading proponents of gun control.

“I’m glad that President Biden is going to be pushing us to take a vote,” Murphy said.

Rep. James Comer (R-Ky.), said Sunday on “Meet the Press” that “passing bills doesn’t solve the problems,” though he argued a bill should be passed to fund mental health programs and communication between law enforcement and social services.

“If passing a bill would simply end gun violence, then I think you would have overwhelming support in Congress,” Comer said.

The suspect in the Club Q shooting faces hate crime charges on top of other charges related to the attack. Polis said the perpetrator should spend life in jail regardless.

“In Colorado, if you kill five people, you’re behind bars the rest of your life … The hate crimes on top of that can be used to augment the sentence, can be used to identify the fact that the LGBTQ community was traumatized,” he said.