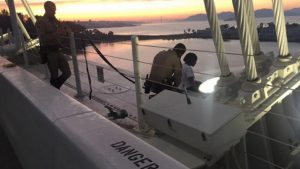 Officer Jeremy Maya can been seen in a photo crouched next to the woman as she sat precariously on the edge, some 525 feet above San Francisco Bay.

SAN FRANCISCO — A California Highway Patrol officer is credited with preventing a distraught woman from jumping to her death Tuesday morning from the eastern span of the Bay Bridge.

The CHP posted photos of the emotional encounter on its Facebook page later that evening, showing Officer Jeremy Maya crouched next to the woman as she sat precariously on the edge, some 525 feet above San Francisco Bay.

Maya and Officer Dustin Ribergaard came upon the unnamed woman that morning and tired to speak with her, but officials said she would not respond to them.

So Maya, an officer trained in crisis intervention, grabbed a strap from a nearby Caltrans tow truck then tied one end to himself and the other end to the bridge’s railing.

After speaking with the woman for some time, Maya coaxed her off the ledge and back over the railing.

The officers took the woman to St. Francisco Hospital for a mental health evaluation, the CHP said.

“We are extremely proud of our officers for risking their lives and for saving a life,” CHP officials said in a statement. “All CHP officers receive on-going crisis intervention training for situations exactly like this.”

Experts say that suicide attempts usually happen when a person is in a crisis, a short-term event when the person is not thinking clearly and often feel hopeless.

Anyone who may be at risk for suicide can call San Francisco Suicide Prevention’s crisis line at (415) 781-0500.