TOKYO — In the months before she jumped to her death from a company dormitory last Christmas, a young employee at a Japanese advertising agency told friends on Twitter of enduring harassment and grueling long hours on the job.

“They’re making me work Saturdays and Sundays again,” the employee, Matsuri Takahashi, 24, wrote in one post. “I seriously want to end it all.”

On Wednesday, the president and chief executive of Ms. Takahashi’s agency, Dentsu, one of the world’s largest advertising firms, said he would resign to take responsibility for her death, as well as the larger problem of dangerously long work hours at the agency that has been laid bare in its wake. Before her suicide, Ms. Takahashi was putting in more than 100 hours of overtime a month, according to an investigation by labor authorities, much of it unreported and unpaid. 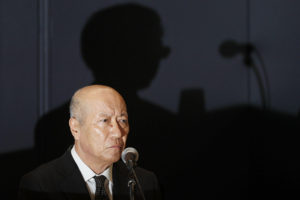 Tadashi Ishii, the president and chief executive of Dentsu, one of the world’s largest advertising firms, announced his resignation at a news conference on Wednesday in Tokyo. Kyodo News, via Associated Press

Japan has struggled for decades to tame the issue of excessive working hours and its consequences, including karoshi, the Japanese word for death from overwork, which gained currency in the 1980s.

Ms. Takahashi’s death in 2015 has led to a new bout of soul-searching. It has also damaged Dentsu’s reputation and brought scrutiny from labor authorities and prosecutors.

“We are taking this seriously,” the Dentsu president, Tadashi Ishii, said at a news conference. “I offer my heartfelt apology.”

He said he would tender his resignation to Dentsu’s board next month but would remain in his post until March to give the company time to choose a replacement.

Working late has long been seen in Japan as a badge of corporate loyalty, repaid by employers in the form of ironclad job security. Both the security and the loyalty that many workers feel have eroded in recent years, as cultural norms have shifted and Japan’s economy has struggled. But the problem of health-threatening overwork has persisted.

In a government report on karoshi published in October, nearly a quarter of companies surveyed said some employees were working more than 80 hours of overtime a month. The true percentage is probably higher, since the survey relied on self-reporting.

Dentsu is known as a particularly demanding employer. A president in the 1950s urged its employees to work single-mindedly to complete tasks and satisfy clients, “even if it kills you.” The company continued to print the exhortation in training materials until after Ms. Takahashi’s death, when it had it removed, according to multiple Japanese news reports.

In the aftermath of the suicide, Dentsu is trying to change its culture.

The company has begun turning off the lights at its headquarters at 10 p.m., as a signal for employees to go home. It also now requires workers to take at least five days off every six months. Its employees are entitled to more vacation days than that but, fearing censure from bosses and colleagues, many never take them, a common phenomenon in Japan.

After examining the circumstances of Ms. Takahashi’s death, the Ministry of Health, Labor and Welfare ruled that its underlying cause was overwork, a finding that entitled her family to compensation. Ms. Takahashi was not alone in working punishing hours, the ministry said. Its investigators searched Dentsu’s offices in November and found what they said was evidence that Dentsu had underreported overtime hours worked by several dozen other employees.

The ministry has referred the case to prosecutors as a potential violation of labor laws. A separate criminal investigation is not yet complete, and no charges have been filed.

Ms. Takahashi told her Twitter followers and family members that she not only worked too much, but that she was bullied by her bosses. The harassment, she said, took the form of faultfinding about her work and sexist comments about her appearance.

As her exhaustion deepened, she said on Twitter, her supervisors chided her for coming to work with “messy hair and bloodshot eyes” and told her she had “no femininity.”

Shoichi Nakamoto, Dentsu’s deputy president, acknowledged at the news conference that “there was power harassment by supervisors.”

“Work was sometimes assigned inappropriately,” he said, “with emails early in the morning and the middle of the night.”