Your kitty is in the clear: People who grow up with cats in the home are no more likely than anyone else to develop mental illness, British researchers reported Tuesday.

They looked for evidence that a common parasite carried by cats might affect the developing brain, making people susceptible to schizophrenia, psychosis and other symptoms of mental illness. The study of nearly 5,000 people found no such evidence, they reported in the journal Psychological Medicine. 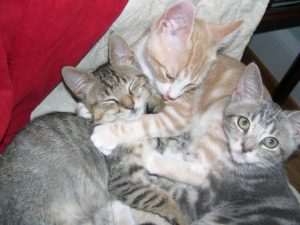 Your cat is off the hook. A new study finds no links between cat ownership and mental illness. Maggie Fox / NBC News

“The message for cat owners is clear: there is no evidence that cats pose a risk to children’s mental health,” Dr. Francesca Solmi of University College London, who led the study team, said in a statement.

“In our study, initial unadjusted analyses suggested a small link between cat ownership and psychotic symptoms at age 13, but this turned out to be due to other factors,” she added.

The suspected culprit is a parasite called Toxoplasma gondii. It’s commonly found in soil and reproduces in cats’ digestive tracts. And it’s found in cat poop.

Pregnant women are cautioned to stay away from cat litter boxes because infection with the parasite, called toxoplasmosis, can cause birth defects and miscarriages.

Studies have also linked toxoplasmosis with a range of human mental diseases, including schizophrenia, bipolar disease, obsessive compulsive disorder and even clumsiness.

“The message for cat owners is clear: there is no evidence that cats pose a risk to children’s mental health.”

T. gondii also has some strange effects on rodents. It travels to their brains and causes them to lose their innate fear of the smell of cat urine. It precisely alters their fear reaction so that they love the smell of cat pee.

This makes infected rodents much more likely to be caught by cats, which eat them and their mind-controlling parasites.

Because the parasite goes into the brains of rodents, it became a suspect for human brain damage, too.

But the British team didn’t find that. It looked at families who owned cats in the 1990s and watched the children grow up.

The researchers said this method is more reliable than asking people who are already mentally whether they had cats as children.

“Our study suggests that cat ownership during pregnancy or in early childhood does not pose a direct risk for later psychotic symptoms,” Dr. James Kirkbride of University College London, who oversaw the research, said in a statement.

“Once we controlled for factors such as household overcrowding and socioeconomic status, the data showed that cats were not to blame. Previous studies reporting links between cat ownership and psychosis simply failed to adequately control for other possible explanations,” Solmi added.

“More than 60 million men, women, and children in the U.S. carry the Toxoplasma parasite, but very few have symptoms because the immune system usually keeps the parasite from causing illness,” the Centers for Disease Control and Prevention says on its website.