The latest Senate Republican drive to dismantle the Affordable Care Act would sharply reduce federal spending on health insurance and cause 34 states to lose such funding, according to an analysis that details the checkerboard of winners and losers the plan would create.

The analysis by Avalere Health, a Washington-based health-policy consulting firm, forecasts that the amount of federal money devoted to Medicaid and private insurance subsidies would shrink by $215 billion between 2020, when the plan would begin, and 2026, the last year money is provided in the bill. 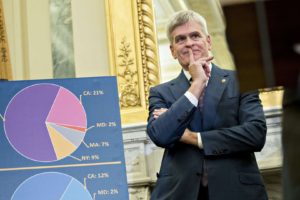 More than half of the overall cuts in the legislation — named for its primary sponsors, Republican Sens. Bill Cassidy (La.) and Lindsey O. Graham (S.C.) — would come from Medicaid, the analysis shows.

States with relatively low medical costs, skimpy Medicaid benefits and no program expansion would win out. Texas would gain more than any state, about $35 billion from 2020 through 2026. On the other hand, states with higher-priced medicine and generous benefits for their low-income residents, such as California and New York, would lose billions of dollars.

But it is not only the largest states that would win or lose. Virginia, which has long had limited Medicaid benefits and stringent eligibility rules, would gain $3 billion, while Maryland, a Medicaid expansion state under the Affordable Care Act, would lose $13 billion.

The bill “redistributes money from states that expanded Medicaid to states that didn’t,” said Caroline Pearson, a senior vice president at Avalere, which released the report Wednesday. “It is a very clear transfer.”

The analysis is among a wave of predictions of the impact of the starkly conservative measure. The bill has given the GOP’s years-long quest to abolish much of the ACA a surprising new chance, two months after the dramatic failure of other Senate Republican legislation.

The Cassidy-Graham measure would kill central features of the 2010 law, including its insurance subsidies, coverage requirements for individual Americans and large businesses, and benefits and other rules for health plans sold in ACA marketplaces. Instead, in a devolution of unprecedented scale, a smaller amount of health-care money would be reshuffled around the country as block grants for much of the coming decade, with states having great freedom on how to spend it.

The plan also would transform the federal role in Medicaid for traditional recipients, ending the program’s half-century tradition as an open-ended entitlement in which the government gives each state a fixed share of whatever its costs are. Instead, federal aid would be converted to a per-person cap — a method that does not adjust as easily over time to expensive improvements in medical care or to possible economic downturns in which low-income people flock to the program.

The analyses of the impact of such massive changes have assumed outsize significance given the calendar. The Senate GOP is trying to speed toward a vote before the expiration on Sept. 30 of special budget rules that would allow lawmakers to pass the bill with a simple Republican majority and no Democratic votes.

Estimates by the Kaiser Family Foundation, due out Thursday morning, will show a pattern of impact on states roughly similar to that in the Avalere report. Earlier this week, a liberal think tank’s forecast predicted even larger cuts. A major trade association is expected to issue its assessment by Friday.

The Senate’s looming deadline means that much of the debate is occurring before the nonpartisan Congressional Budget Office has time to issue an official forecast of the legislation’s effect. That assessment is anticipated next week.

The Avalere predictions help to explain the worries of a bipartisan group of 10 governors, who wrote to the Senate’s leaders on Tuesday urging them “not to consider” the Cassidy-Graham bill. All four GOP governors who signed on to the letter — John Kasich of Ohio, Brian Sandoval of Nevada, Charlie Baker of Massachusetts and Phil Scott of Vermont — plus Alaska Gov. Bill Walker, an independent, represent states that expanded their Medicaid programs under the ACA and now have the most at risk.

Among governors critical of the Cassidy-Graham plan, a major issue is its steep cuts in federal Medicaid spending. Not only would states face a per capita cap, but the ACA’s expansion of Medicaid would be erased, with new restrictions on how states could spend the money on their expansion populations.

The latest Republican proposal has unnerved health insurers, with two of the industry’s major trade groups denouncing the bill Wednesday. “We cannot support this proposal,” Marilyn Tavenner, president of America’s Health Insurance Plans, wrote to the Senate’s majority and minority leaders. The plan “would have real consequences on consumers and patients by further destabilizing the individual market, cutting Medicaid, pulling back on protections for preexisting conditions.”

Scott P. Serota, president of the Blue Cross Blue Shield Association, also addressed the impact on markets. “The legislation . . . would increase uncertainty in the marketplace, making coverage more expensive and jeopardizing Americans’ choice of health plans,” said Serota, whose members include the only health plans still being sold in ACA marketplaces in some states.

And, he added in a statement, the plan would undercut Medicaid funding intended “to protect the most vulnerable.”

The divisions between winners and losers trace political fault lines. Of the 16 states that Avalere predicts would gain money under the plan, all but one have Republican governors. In the one — Virginia — Democratic Gov. Terry McAuliffe tried to expand Medicaid but was blocked by a GOP-controlled legislature.

At its core, this latest health-care bill embraces a decades-old conservative goal: capping taxpayers’ expenditures on Medicaid and giving states full control over the program. As he sells the legislation to conservative governors and activists, Graham describes it as a way to end what he calls a progressive dream of universal health care managed from Washington.

“Let’s get back to the basics of being conservative,” Graham said in a weekend interview with Breitbart News. “We take the money that we would spend on Obamacare in Washington, and we block grant it to the states. . . . No longer will four blue states get 40 percent of the money.”

Graham, first elected to the House as part of the 1994 “Republican revolution,” was present for a serious block-grant campaign the following year as GOP members of Congress teamed up with governors to devolve power from Washington. Among their goals, they sought to cap Medicaid spending and carve the program’s funding into “MediGrants” that each state could apply for its own designs.

The proposal died when it was vetoed by President Bill Clinton, using one of the pens with which Lyndon Johnson had signed Medicaid into law three decades earlier.

The block-grant concept remained in conservative thought and reemerged in 2010, when Rep. Paul D. Ryan (R-Wis.), then a member of the House’s tax-writing committee, included the idea in a “Roadmap for America’s Future.” In 2011, Wisconsin’s new GOP governor, Scott Walker, joined a delegation of conservatives to testify in Washington on the wisdom of devolving Medicaid to the states.

Walker has had a role in designing the Cassidy-Graham legislation. And he was one of 15 GOP governors who signed their own letter to Senate Majority Leader Mitch McConnell (R-Ky.) endorsing the bill.

Yet the boldness of the plan — and the extent to which it would free states from the ACA’s rules — has startled even some Republicans in recent days. “It’s not about health policy anymore,” said a former senior GOP congressional staffer. “This is about, in the Senate particularly, they need a vote. They were getting their rear ends hammered by the president and their base. It’s about, ‘Are we winners or losers?’ ”

The forecast that Avalere issued Wednesday does not include any predictions on the legislation’s effect on the number of Americans with health insurance. The firm’s staffers are trying to produce rough coverage estimates. The forecast due next week from the Congressional Budget Office also may not include that information, even though the CBO typically calculates the impact on coverage along with budgetary consequences of health-care legislation.

But the coverage effect is tricky to assess because each state would gain the ability to establish its own rules to replace federal insurance regulations created under the ACA. The regulations most at risk are those limiting the premium differential that insurers can charge older customers compared with younger ones, requiring specific health benefits and blocking insurers from charging more for people with preexisting conditions.

The Avalere report also notes that the bill would lead to a “fiscal cliff” when funding ends in 2027, leaving it to a future Congress to decide whether to extend the legislation.