California working to intervene earlier before a brain illness crisis

What goes through your mind as you walk by someone living in a doorway or an alley? Is it sorrow? Fear? Or does the sight not always register, because homelessness seems a problem that’s too big to fix?

Last month, a new report on California’s homeless crisis put the number of people living without permanent shelter at 135,000 across our state. That followed a series of reports on this year’s community-level “point-in-time” counts that found a staggering rise in the number of people living homeless in cities, including Los Angeles (55,000) and Sacramento (3,600). In San Francisco, the number held steady but alarming at 7,500. 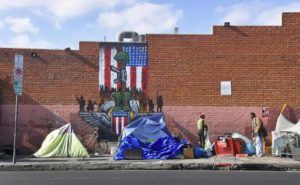 Photo: FREDERIC J. BROWN, AFP/Getty Images
Makeshift tents house the homeless on Nov. 10, 2017, on a street in Los Angeles street, home to one of the nation’s largest homeless populations. About a third of those living on the streets have mental illness.

For all the focus on the role the lack of affordable housing plays in California’s homeless numbers, there is another factor not getting nearly enough discussion: Research has found about a third of the people living on our streets have some form of brain illness.

And that’s a correlation that we do have the power to fix.

For decades, the paradigm for mental health care in this nation has centered on intervention and treatment that come well after the illness has taken hold. So much of the conversation continues to revolve around crisis care: How to reach and support people sleeping on the streets or behind bars whose lives have been derailed because their brain illness has gone untreated.

Try to think of another serious illness that we routinely treat only after it’s reached crisis stage. When it’s diabetes or heart disease, our goal is to intervene at stage one, and bring the disease into remission. Treatment involves education, lifestyle changes and, if necessary, medication — all with the goal of managing the disease.

Why, then, when it comes to brain illness, do we routinely intervene at stage four?

Each year, an estimated 100,000 young people in the United States experience their first psychotic episode, a symptom of serious mental illness, including schizophrenia and bipolar disorder, that can involve terrifying hallucinations and delusions.

Just as with any other serious illness, the longer a brain illness goes untreated, the more destructive the disease becomes, and the more likely the individual will veer down a damaging and potentially fatal path.

In the United States, the average delay in receiving treatment after a first psychotic break is 18.5 months, well after the disease has progressed. In Britain and Australia — countries that have emerged as leaders in mental health care — the average delay is less than six months.

And here’s the important point: Mental illness does not have to be a life sentence of despair and dysfunction. Research makes clear that we do know how to intervene before stage four, and with remarkable results. We have years of data, out of Britain and Australia, and also out of New York, Oregon and California that show early intervention works. These early interventions are not medications; they build resilience through social, cognitive, occupational/academic, and psychological supports. When we help young people navigate the early stages of illness, they can learn not only to cope — but to thrive.

One would think that California would be on the forefront of enacting policies that make early intervention in brain illness the standard. But that’s not been the case. UCLA and UC Davis are among the institutions that operate model programs. But fewer than half of California’s counties offer such services, and the 24 counties that do can’t support programs large enough to meet demand. There are no statewide protocols to ensure counties are using the same standards and measurement tools, let alone systems for sharing data on outcomes.

The issue is rooted in both funding and training capacity. In 2004, California voters passed the Mental Health Services Act, a landmark initiative that taxes millionaires to bolster funding for care. The act generates about $2 billion annually, funding that has provided critical support for tens of thousands of people living with mental illness. But by statute, 80 percent of its revenue is dedicated to community services for people already seriously ill, and just 20 percent to early diagnosis, prevention and intervention.

Of course, we can’t cut services for people in crisis when the need is urgent. So, how then, do we get ahead of the problem?

Groundbreaking legislation signed into law last month by Gov. Jerry Brown can help launch that paradigm shift — but it requires commitment from both the public and private sectors.

AB1315, written by Assemblyman Kevin Mullin, D-San Mateo, and sponsored by the Steinberg Institute, plows new ground. First, it sets up a public/private partnership to generate a new revenue stream dedicated to funding early intervention programs that meet evidence-based standards set out by an expert advisory board.

The law sets up a special account to be funded by contributions from the private sector and government grants. Counties can apply for awards and, if chosen, will be required to provide matching funds, giving them the opportunity to double the investment of their mental health dollars.

Just as important, the bill creates a clear avenue for innovative partnerships between California’s technology sector and the county agencies responsible for providing the bulk of mental health services. Why is this important? Because our tech sector knows how to build products and bring them to scale — something we’ve struggled to achieve with evidence-based early intervention programs in California.

The tech industry already is engaged in developing technology that will help detect early indicators of mental illness, as well as aid in monitoring and treatment of symptoms. This bill provides an opportunity for leaders in Silicon Valley and throughout the private sector to partner with county service providers in the battle to transform the treatment model.

How can you help? The law goes into effect Jan. 1, and fundraising has already begun. Garen and Shari Staglin, the Napa County couple whose nonprofit, One Mind, has leveraged more than $280 million for brain health research, are helping spearhead that effort. Individuals and companies interested in helping launch the fund can send donations to the state’s Mental Health Services Oversight and Accountability Commission for deposit in the Early Psychosis and Mood Disorder Detection and Intervention Fund.

For those funds to have impact, counties need to develop proposals that qualify for awards. You can contact your county agency to find out whether it offers early intervention services for psychosis and other symptoms of serious mental illness — and if not, why?

Working together, we believe we can bend the curve on how early we intervene. “Before stage one” has been the mantra of Mental Health America. It should be the goal in California.

Sacramento Mayor Darrell Steinberg founded the Steinberg Institute in 2015 with the aim of advancing sound public policy and inspiring leadership on issues of brain health. Thomas Insel, M.D., served as director of the National Institute of Mental Health from 2002 to 2015. He is co-founder and president of Mindstrong, a Silicon Valley startup dedicated to advancing the diagnoses and treatment of brain illness. To comment, submit your letter to the editor at SFChronicle.com/letters.

By Darrell Steinberg and Thomas Insel