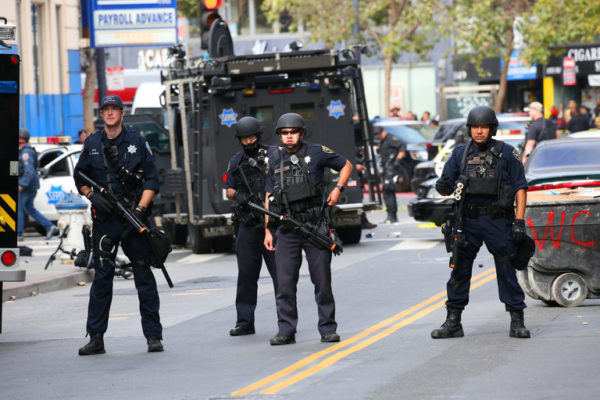 Police officers entered into a standoff with a man carrying a gun in downtown San Francisco in July.

(Want to get California Today by email? Here’s the sign-up.)

When the police confront someone in a crisis, an officer’s choice of words can make the difference between a peaceful resolution and a turn to violence.

With that in mind, San Francisco is embracing a new strategy: Let a professional do the talking.

The city announced last week that it was forming a new five-member mental health team that would join police officers on calls involving people who they suspect may be mentally ill or under the influence of drugs.

“This is the latest reform that prioritizes the sanctity of life above all else,” Mayor Ed Lee said in a statement.

Officials said the idea was to let highly trained clinicians try to pacify troubled individuals, and hopefully avoid the sorts of deadly police confrontations that have recently set off protests around the country.

During any encounter, law enforcement officers would take the lead in determining when it is safe for their mental health colleagues, who will be unarmed, to approach a subject.

Barbara Garcia, the director of the Department of Public Health, said the collaboration of agencies would allow mental health professionals to spot opportunities for interventions that the police might otherwise miss.

For example, she said, a recent call involved a person who was armed and under the influence of drugs. Unknown to the police officers who were called to deal with the situation, the person was also a patient in the city’s public health system.

“We could have at that point had one of the providers who knew this person help with the consultation with the police,” Ms. Garcia said.

In Los Angeles County, law enforcement agencies have for years paired clinicians with police officers. Mark Gale, the criminal justice chairman for the Los Angeles County Council of the National Alliance on Mental Illness, said the programs had saved lives.

No matter how much a police officer is trained, he said, only a clinician has the depth of education and experience to talk to people in crisis the right way.

“So, that’s what you want,” Mr. Gale added. “You want somebody that can defuse the situation so nobody gets hurt.”